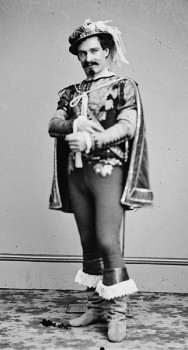 John Edward McCullough was born in Coleraine, Ireland. He went to America at the age of sixteen, and made his first appearance on the stage at the Arch Street Theatre, Philadelphia, in 1857. In support of Forrest and Edwin Booth he played second roles in Shakespearean and other tragedies, and Forrest left him by will all his prompt books. Virginius was his greatest success, although even in this part and as Othello he was coldly received in England (1881).

On the night of September 29, 1884, he broke down on stage at McVicker’s Theater in Chicago and was unable to recite his lines. The audience, thinking he was drunk, hissed and booed. In fact, McCullough was suffering from the early stages of general paresis. He was later committed to the Bloomingdale Asylum but continued to decline and finally died in an asylum in Philadelphia. His “insane ravings” became popular and were imitated in one of the first audio recordings.

John Wilkes Booth appeared at Ford’s Theatre, Washington, on March 18, 1865, in the play The Apostate which was performed as a benefit for John McCullough, less than a month before he assassinated President Abraham Lincoln.

In 1889, after his death, he was memorialized with a statue in Philadelphia – to which Edwin Booth reportedly refused to contribute.

Photo and biography via Wikipedia 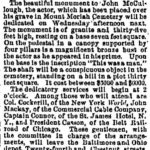 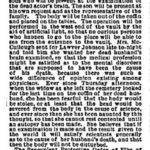