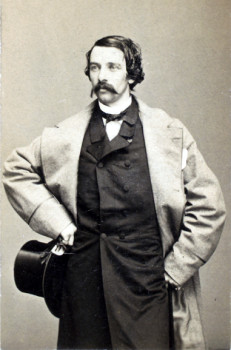 Edwin Adams was born in Medford, Massachusetts in 1834. Although he did not come from a theatrical family, he chose to pursue the dramatic profession at an early age. He first appeared on stage at the National Theatre in Boston and in September of 1854, at age 21, he made his first appearance in Philadelphia at the Chestnut Street Theatre. In 1858 he began performing at the Richmond Theatre in the Virginia capital. There, he became a well known leading man and a favorite of theatre goers. During this time he also met his wife, Mary, who was a member of the Richmond theatre troupe.

He achieved his first success in New York in 1863 with a performance at Niblo’s Garden Theatre. Niblo’s, known at that time as a “pleasure garden”, provided indoor/outdoor entertainment and amusement for wealthy New Yorkers. It is here that Adams launched a long, storied New York career; drawing full houses wherever he performed. When Edwin Booth, a contemporary of Adams and brother of John Wilkes Booth, opened his self-named theater he engaged Adams as a “stock star”. Adams performed in many productions at Booth’s playhouse as well as other venues in NY until 1875. In July 1876 Edwin and his wife traveled to Australia where Edwin was billed as one of the first attractions at the newly opened Academy of Music in Melbourne. After a few performances, his health failed and he sailed for San Francisco where he remained for some time before returning to Philadelphia. The remaining weeks of his life were spent at the home of Daniel Gardner who was a well known circus and minstrel performer and the uncle of Edwin’s wife. It was reported that Edwin, being aware of his impending death, called his wife to his side to bid her a last farewell on the morning of October 28, 1877. He died just a few hours later. His funeral was held at the Episcopal Church of St. James, and, according to his personal wishes, was buried at Mt. Moriah Cemetery in a lot owned by the Actor’s Order of Friendship which is described in various newspaper stories as a Masonic Order, brotherhood and benevolent society.