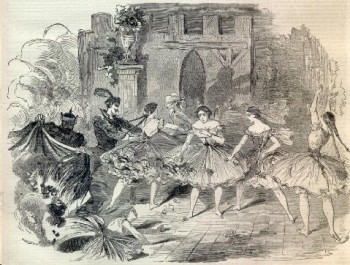 On the evening of September 14, 1861, an audience of more than 1,500 filled The National Theatre on Walnut Street to see a performance of “The Tempest” produced by William Wheatley. Wheatley, a Philadelphia actor and manager, had leased the theatre weeks before and refurbished it to present the stage performance of the Shakespearian classic. The play is set on a remote island and he spared no cost in creating the elaborate scenes, even employing a famous London machinist to assist with the complicated production. An immense ballet corps was engaged. Among the dancers were the four Gale sisters: Ruth, Abeona (also referred to as Adeline), Hannah and Cecilia (also referred to as Zelia and Zela). The sisters, from England, had toured throughout the country before arriving in Philadelphia. All under the age of 23, the sisters were accomplished dancers and often described as handsome and talented.

It is believed that while dressing, one of the sisters, reaching for a costume, came into contact with a gas jet which ignited her gauzy clothing. As her sisters and other dancers attempted to extinguish the flames, the blaze spread among them. Theatergoers were confused as they heard screams and saw flashes of light and stagehands running about. One of the dancers, engulfed in flames, ran downstairs toward the stage. Unsure of what was happening, Wheatley originally instructed the audience to remain in their seats. The curtain was lowered, blocking the backstage terror and chaos from them. When Wheatley discovered the severity of the situation, he reappeared on stage and notified the audience that the play could not continue and asked them to leave the theatre quietly. By this time, about a dozen girls were trapped in the blaze. Several of the panicked girls, among them Hannah Gale, jumped from the dressing room windows to the street below. Harper’s Weekly described the scene on the street behind the theatre as “most piteous and agonizing”. Some of the burned and wounded were carried to nearby hotels and taverns while others were taken by carriage to Pennsylvania Hospital. Policemen, doctors, druggists and citizens converged on the scene to offer whatever assistance they could to the injured and dying.

Although The Continental Theatre was destroyed by the fire, no audience member died, but at least nine of the dancers perished. A coroner’s inquest exonerated William Wheatley, determining that he was not to blame for the fire. Wheatley and his wife held a number of funerals for the victims at their home. Mr. Wheatley also erected a memorial in honor of the Gale sisters in Mt. Moriah Cemetery where they are buried.

The theatre reopened in 1865 but was to see three more devastating fires before the end of the 1800’s. The sad history and the memories of those who perished in the multiple fires at 807 Walnut Street are now covered by a parking lot.

The inscription on the following stone was printed in a New York Clipper article:

Over the deep broad grave in Mount Moriah Cemetery, Philadelphia, in which repose in eternal silence the four sisters Gale, a memorial tablet has been erected by the subscription of many kind friends who knew the poor girls in their pure life. And upon it has been graven the following inscriptions :On one side – With a mother’s tearful blessing They sleep beneath the sod, Her dearest earthly treasures Restored again to God! And upon the other – IN MEMORIAM Stranger, who through the city of the dead With thoughtful soul and feeling heart may tread, Pause here a moment – those who sleep below With careless ear ne’er heard a tale of woe: Four sisters fair and young together rest In saddest slumber on earth’s kindly breast; Torn out of life in one disastrous hour, The rose unfolded and the budding flower: Life did not part them – Death might not divide They lived – they loved – they perished, side by side. O’er doom like theatre let gentle pity shed The softest tears that mourn the early fled, For whom – lost children of another land! This marble raised by weeping friendship’s hand To us, to future time remains to tell How even in death they loved each other well. 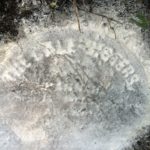 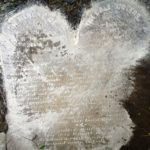 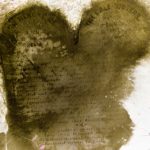 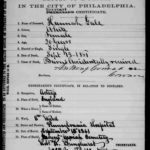 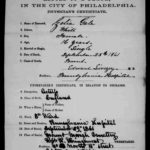 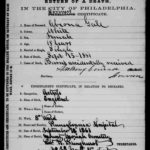 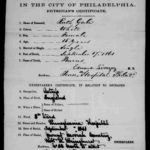