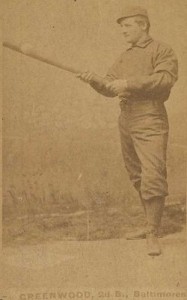 Professional baseball player Bill Greenwood was born in Philadelphia in 1857. At age 25, he made his big league debut with the Philadelphia Athletics. The 1882 season was the first for the Athletics, one of the founding franchises of baseball’s American Association. This was actually the second Philadelphia Athletics organization. The first, formed in 1860, was a member of the National Association of Base Ball Players.

The Athletics called Oakdale Park in the West Kensington section of Philadelphia their home for the 1882 season. The park had been used for amateur baseball since the Civil War but was torn down shortly after the Athletics first season ended. Bill played second base and shortstop, and was a switch hitter, able to bat both left and right handed. During his career, which ended in 1890, he also played for the Brooklyn Atlantics, the Baltimore Orioles, the Columbus Solons and the Rochester Broncos.

Bill passed away on May 2, 1902 in his hometown of Philadelphia. 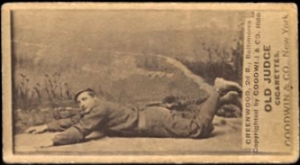