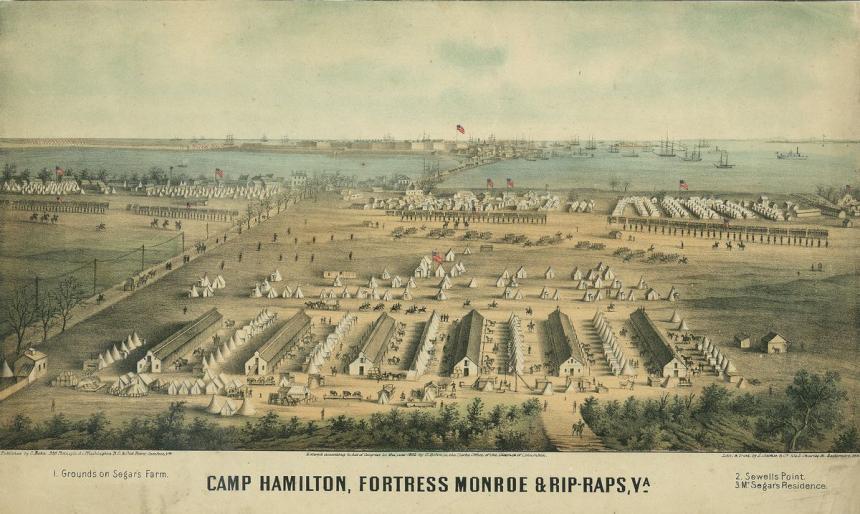 Tom was the second of seven children born to Charles William Leonard (1809-1876) and Charlotte Ardis Leonard (1819-1902). Charles was a weaver, one of thousands who worked to make Philadelphia a leader in textile manufacturing in the 19th century. Tom was born in Moyamensing Township, south of the original city limits, which became part of the city in 1854. His exact birthdate is unknown but his age at his last census confirms the year was 1842, midway between the births of his siblings.

When the Civil War began, Tom was an apprentice oak cooper, learning how to make wooden barrels. He joined the Army and was “mustered in” on August 22, 1863, assigned to Company F of the 3rd Pennsylvania Heavy Artillery. They were sent to “Fortress Monroe,” as it was then called, which, even though it was in Virginia, was a Union fort throughout the war on the southern tip of the Virginia peninsula.

Confederate prisoners of war were held nearby at Camp Hamilton. A couple of small “detachments”  from Company F had been sent on some brief assignments, but otherwise they were stationed there throughout the war. Tom’s job was guard duty, so he never saw any action. On June 6, 1865 he was promoted to Corporal.

Fort Monroe gained some notoriety for being the place of incarceration of former Confederate President Jefferson Davis for two years. After Camp Hamilton was emptied, Company F was “mustered out” on November 9, 1865. Tom returned to his trade, never married, lived with his parents, and died of tuberculosis just six and a half years later. His mother applied for his war pension shortly after it was made available as part of the Disability Act of 1890.