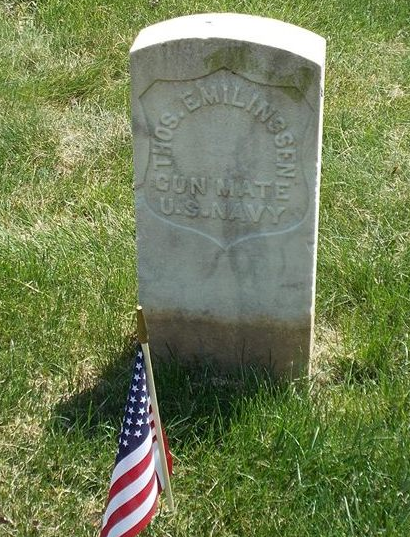 Thomas Emilinssen was a 23-year-old immigrant from Copenhagen, Denmark with a heart for the sea when he arrived in New York in 1901. He wasted no time finding his new career when he joined the United States Navy later that year. Eight years after that, his ship, the USS Idaho, was in port at Teague Island, Philadelphia and Thomas filed his Petition for Naturalization, proudly becoming a citizen on November 3, 1909. While still in the service in 1916, he married Julia Lautenbach in Philadelphia, and their only son, Joseph, was born later that year.

When America entered the first World War in 1917, Thomas was a Gunner’s Mate, 1st Class aboard a destroyer, the USS Jacob Jones. In the war’s early months, she earned a sterling reputation for rescuing Allied and neutral crews following U-boat attacks. The destroyer and its crew also engaged submarines on several occasions and was the target of unsuccessful torpedo attacks in May and July of 1917.

On December 6 the ship was off the southwest tip of England in the Atlantic when an enemy torpedo finally hit its target. It was the first US Navy destroyer ever to have been sunk through enemy action. Also significant was the humanitarian gesture that came next. The U-boat commander transmitted the coordinates to the ship’s base in Ireland advising the Allies to come rescue the survivors, and he even took two badly injured crewmen aboard his U-boat, not having room for any more.

A total of 64 crewmen were lost but 46 survived, and one of them was Thomas. This photograph was taken the next day of 34 of those who were rescued, so it’s quite likely he’s one of the men in this picture: 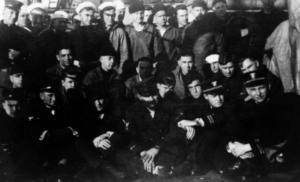 He and others contracted tuberculosis from the long exposure overnight to the cold weather and water while awaiting rescue. Physicians of that era believed that fresh air, bright sunshine, and high altitudes alleviated many of the symptoms of “consumption.” The Navy found all three in abundance at an abandoned Army post in Colorado called Fort Lyon, east of Pueblo. It was converted for use as a sanitarium from 1906-1922, so sailors like Thomas were sent there for rest.

He died there on February 18, 1919 at the age of 40, and was buried here in the US Naval Asylum Plot. He would be proud to know his son, Joseph Frederick Emilinssen, would also serve his country in the Army during World War II.