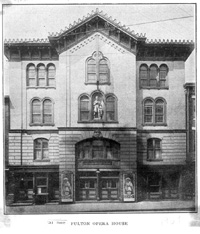 Samuel Sloan was one of four children born to William and Mary Kirkwood Sloan in Chester County, Pennsylvania. At a young age, Samuel apprenticed as a carpenter and achieved the position of journeyman carpenter at age 18. Sometime in the 1830’s Sloan moved to Philadelphia as it is reported that he worked building cellblocks at Eastern State Penitentiary (construction of the original prison was completed in 1836). For the next decade he worked on various projects throughout the Philadelphia area but it wasn’t until 1851 that he felt justified in labeling himself an architect. In 1853 he began a successful 6 year relationship with fellow Philadelphia builder and architect John Stewart. Sloan & Stewart became one of the most influential architectural firms in 19th century America and even after their partnership dissolved in 1857 the two continued working together.

The Panic of 1857 (a financial panic which caused bank failures, factory shutdowns, unemployment, and construction stoppages) and the ensuing economic downturn slowed Sloan’s business. This was followed by the Civil War which impacted architectural design and building when many large projects were brought to a halt. Sloan may be most remembered for his prolific writing of books and articles on architecture and design. Starting in 1851, he published volumes on the topic and in July of 1868 he began issuing The Architectural Review and American Builders’ Journal, the first architectural periodical published in the United States. Unfortunately, it ceased publication just a few years later when it failed to earn the support of the architectural community. His books, however, continued to sell nationally.

Sloan has been credited for architectural work not only in Philadelphia and Pennsylvania, but in many other locations including Ohio, Delaware, New Jersey, Alabama, Mississippi, Virginia and the Carolinas. After designing the much needed Western State Asylum for the Insane in North Carolina, his popularity in that state grew and other commissions followed. In 1883, Sloan moved to North Carolina and opened an office in Raleigh. Just a year later, he passed away from heat prostration after extended exposure to the southern summer sun.

In the early 1850’s, Samuel Sloan was commissioned to design a building that would serve as a community center in Lancaster, PA. Fulton Hall was erected in 1852 and named for steam engine pioneer Robert Fulton. Spanning more than 160 years, the theatre has hosted live stage performances, vaudeville, burlesque, movies and regional theatre.It is considered to be the nations’ oldest continuously operating theatre and in 1969 was designated a National Historic Landmark. Although it has undergone several renovations, the theatre still stands. 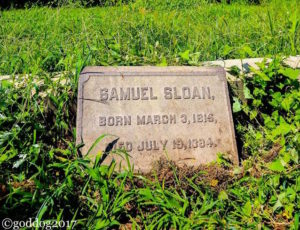