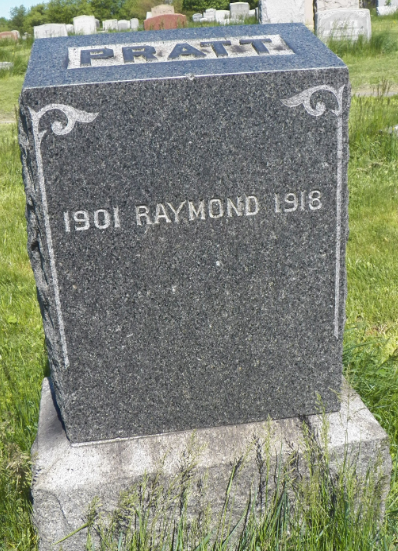 Ray was officially a member of the Armed Forces and unofficially one of the early local fatalities of the 1918 pandemic known as the “Spanish Flu.” He was the last of three children in the Pratt family, born just after they moved across the river from Philadelphia to Riverton, New Jersey, not far from the Tacony-Palmyra Bridge.

His father’s name was Rathmell Pratt but he was sometimes known as Rothwell, the son of a hotel keeper in rural Chester County PA. His mother, Anna, was a native of Ireland. Brother Harold was born in 1893 and sister Annette arrived five years later. Harold was listed as an invalid in the 1910 census, and claimed total disability when he registered for the draft in 1917.

There was no draft card located for Ray, but a Veterans Administration record confirms he was a soldier in 1918, and he claimed his birthday was June 2, 1899 in order to enlist. No information on his enlistment date or where he was stationed was found either, but he probably was a new recruit, inducted sometime in mid-1918.

Influenza was spreading quickly among soldiers in basic training in 1918. The first pandemic-related fatality in New York City occurred on September 15, but in Philadelphia the triggering event was the Liberty Loans Parade on September 28 to promote government war bonds. Today it would be called a “super-spreader,” resulting in 12,000 deaths in the city as the virus was dispersed among the contagious attendees.

On his death certificate, Ray’s doctor said he first treated him for the flu on September 26, and he died at Frankford Hospital in Philadelphia on October 1. His residence was the same place where he was born, on Howard Street in Riverton. Rothwell died in 1921 from the flu, Anna, died in 1923, Howard in 1925, and Annette in 1937, all buried in the same plot.