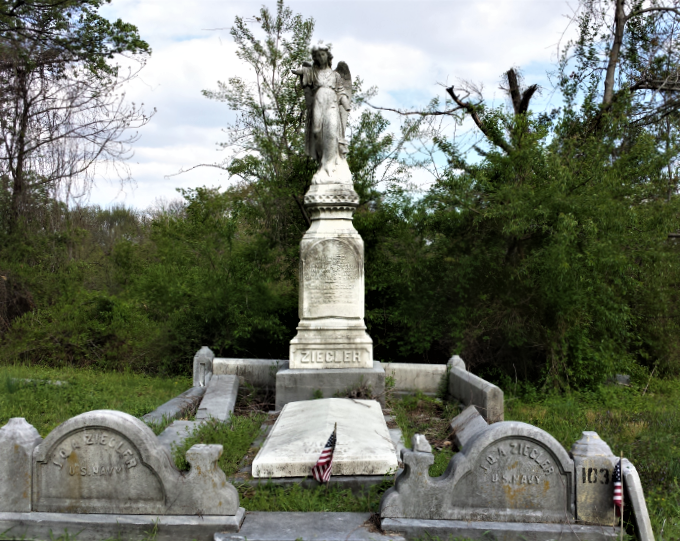 There’s no doubt that the Zieglers wanted to name their baby boy in honor of the sixth U.S. President who was in office at the time. John was born in New Jersey but details of his early years are unknown until he married Mary Mercy Palmer and they had their only child, Mary Emma, in 1851. When he was 30 he went into the United States Naval Academy.

After graduation in 1862 he embarked on a 33-year career with the Navy, starting as Acting First Assistant Engineer. John was on the USS Florida as it participated in the blockade of Charleston, South Carolina. While there, he led an

on-shore raid and captured several prisoners. He joined a double-turret ironclad, the USS Monadnock, in the battles at Fort Fisher, North Carolina in December, 1864 and January, 1865. For most of the rest of his career he held the rank of Chief Engineer.

Part of his obituary that was printed in the Philadelphia Inquirer gives further details of his life after the war: 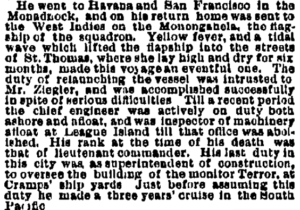 Mary died of tuberculosis in 1878 and was buried in what became a family plot. Mary Emma’s first two children who died in infancy were buried there several years earlier. John promptly moved in with Mary Emma, her husband, and their two boys at 1506 North 18th Street.

He continued working for the Navy another seven years, until the day he died. His death was reported as sudden, although the cause was the same as his wife’s, tuberculosis. The inscriptions around the sides of the monument include the rest of Mary Emma’s family and John’s mother and sister.