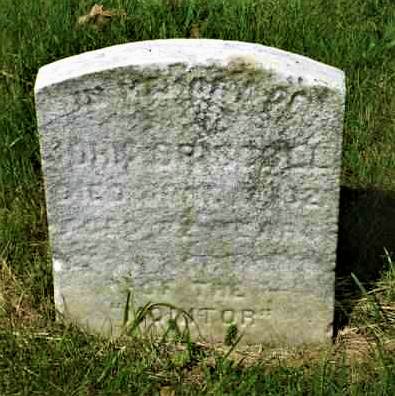 There are only a few documents on which to build the story of John’s life other than his own statements, but the story is nonetheless intriguing. The only verifiable census report is from 1920 when he was in the Naval Hospital 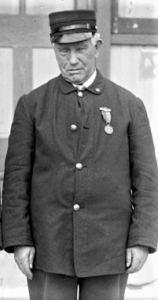 in Philadelphia. How long he was there is unknown, but other census facts show he was widowed, born in Ireland, and emigrated in 1861.

News reports of his death in 1921 reveal much more about his life. His obituary was printed in newspapers around the country, based on the presumed fact that he was the last surviving member of the crew of the USS Monitor when it engaged in “the battle of the ironclads” with the Confederate ship originally known as the Merrimack.

Both ships were more than just clad in iron; they had been radically redesigned to rely only on their steam engines, eliminating masts and sails. Both were on their maiden voyages when they met in Hampton Roads, Virginia on March 9, 1862 in a four-hour engagement. It was considered a draw, with neither ship suffering much damage. Although they never met again, that day marked the end of the era of wooden warships. Union troops occupied Norfolk on May 10, and with the Virginia surrounded, the captain ordered the ship destroyed. That same year, on December 31, the Monitor sank in a storm off Cape Hatteras. Other ironclads would soon join the fleets of both navies.

The Monitor’s name was inscribed on John’s gravestone. but only one document, a record of veterans’ burials kept by the state of Pennsylvania, mentions the Monitor, and that same record says his enlistment in the Navy was from February 14 ,1863 – July 23, 1864. By then the Monitor had long settled in to rest on the ocean floor.

The obituary printed in the Philadelphia Inquirer gives a different account that suggests that enlistment date was off by a year. That account, which may have been based on recollections of John’s friends or even John himself, can’t be confirmed by actual documents but is worth telling. It says he arrived in America in 1854, found work in New Hampshire, and moved to Brooklyn. That’s where the Monitor was built and where he responded to a call for volunteers to join the Monitor’s crew, which he did on February 14, 1862. It also relays John’s story that President Lincoln and his Cabinet came aboard the ship later to congratulate the crew. 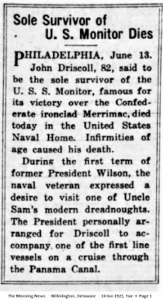 The newspaper story that was telegraphed across the country cites a government record that claims John worked with the ship’s Commanding Officer, Lt. John Worden. Whether such a document still exists is unknown. Shown here is another account that appeared in the Wilmington, Delaware Morning News.

After the war there are two records of someone named John Driscoll reenlisting in the Navy. The more plausible one says he was from County Cork in Ireland, 24 years old, enlisting in Philadelphia on February 1, 1866 for three years, with one year previous naval experience. Other than the age, this could be a match.

The cause of his death was officially listed as senility. There’s no other information on how he might have spent his post-war years, but being on board a ship through the Panama Canal must have been the high point of his life.