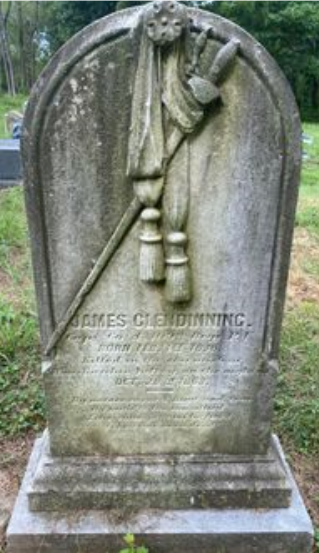 The Glendinning heritage was Scottish and Presbyterian. James’ father, Robert, graduated from the University of Edinburgh, came to America in 1832, and married Elizabeth in 1833. They had seven sons, James being the oldest, and one daughter. Robert was in the mercantile business before becoming a well-to-do bank cashier. The 1860 census included a servant in their home at 3405 Baring Street, just north of today’s Drexel University. He also was one of the founders of the First Presbyterian Church-Mantua, at 35th & Baring, serving as elder there until his death.

By 1860, James and his 18-year-old brother, Charles, were on their own but living just four blocks north of their parents, at 33rd & Haverford Ave. Charles died suddenly of typhoid fever on January 20, 1861. Since Mount Moriah had only been open about five years, the family had their choice of locations, and selected a scenic plot on a hill in Section 37, lot 113.

James enlisted December 3 of that year with Company A of the 109th Pennsylvania Infantry. As part of the Army of the Potomac, they saw action at Chancellorsville, then at Gettysburg in July, 1863, and then moved south with the Army of the Cumberland to Chattanooga, Tennessee. They camped on the western slope of Lookout Mountain on October 28 to guard a Federal supply line, but were attacked in one of the few nighttime actions of the war. It was a small skirmish, and a Union victory that came to be known as the Battle of Wauhatchie, but it was there that 1st Lieutenant Glendinning was shot and killed. 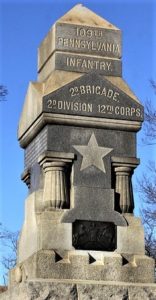 This monument was placed in Chattanooga by the state of Pennsylvania in honor of their native sons who fought in Tennessee. James is also listed on a plaque in Gettysburg, shown below, as second in command of Company A, misspelled as J. Glendening. 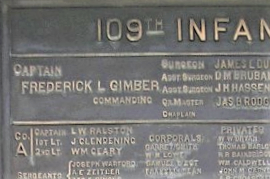 Returning bodies of the deceased to their families was often impossible, but Robert was able to have his son buried at Mount Moriah on January 1, 1864, beside his brother Charles. The grave stone, created to honor him features a description of his military service.

The officer of war had a notable story, and so did his family of wealth, illustrating the highs and lows of life. Two of the seven sons died in infancy. Charles was a carpenter who died at 18 and James the soldier died at 26. Walter also served in the war, failed in a business venture making whips, and died as a clerk at age 40. William was a salesman who died at 31. But there was one who must have inherited his father’s financial acumen, and he shared his name. Robert Jr. was a stock broker at 21 and built his brokerage business into a financial powerhouse, leaving an estate worth $620,000 (or $20 million today) when he died in 1893 at age 54.

Life was abruptly short for some of the brothers, but not long for any in the family except the daughter, Eliza, who made it to 80. Their father died at 72 and their mother at 58. Both parents joined Charles, James, Walter, and William in the family plot here in the circle of St. John.