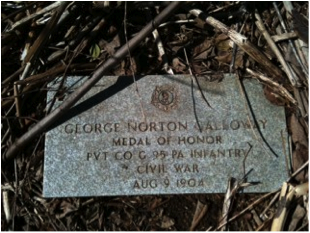 Civilian documents indicate George was born in 1844 but military records rely on his assertion that it was 1841. Like many others, he may have “inflated” his age when he enlisted in 1861. His family, all born in Philadelphia, included a sister and four brothers, and he found his vocation at age 16 as a brush maker.

George joined Company G of the 95th Pennsylvania Infantry on September 18, 1861 and was part of the single bloodiest day of the war, at Antietam, Maryland in 1862. He deserted his regiment on July 1, 1863, the first day of the Battle of Gettysburg, but was arrested and returned to duty September 20. The 95th fought in the Wilderness campaign from May 5-7, 1864, which was the beginning of the Union offensive to take Richmond. It was also the first meeting of forces led by Union General Ulysses S Grant against Confederate General Robert E Lee, but was not considered a victory for either side.

The former deserter put his bravery on display on the way to their next engagement at Spotsylvania Court House. George was awarded the Medal of Honor “for extraordinary heroism on 8 May 1864, while serving with Company G, 95th Pennsylvania Infantry, in action at Alsops Farm, Virginia. Private Galloway voluntarily held an important position under heavy fire.” He was one of only three members of that entire regiment to be so recognized for their actions during the war, but he wasn’t actually given the award until 1895, 31 years later.

George was discharged November 18, 1864 and returned to his job as a brush maker, living with his mother and three younger brothers, but he also dabbled in a second career as a performer. City directories show his occupation was, in various years, an actor, vocalist, or musician. When those jobs weren’t enough to pay the bills, he fell back on his work as a brush maker. 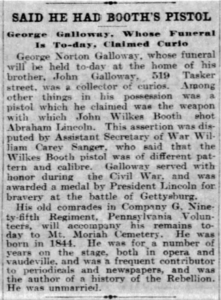 George also authored several books, including one on the 95th Infantry, which was republished in 2010. He was living with his older brother John when he died on February 9, 1904 and had this colorful obituary in the local newspaper, which incorrectly links his medal to Gettysburg. (Unfortunately, another incorrect fact is the death date on his headstone.) John was also a Medal of Honor winner and was buried next to George when he died three months later.