The Ferrells were residents of the Point Breeze section of South Philadelphia when George was born in 1911. They had just one other child, a daughter, three years later.

The young family moved to Atlantic City in the 1920s and that’s where George graduated high school, as the Great Depression was worsening. Fortunately, he didn’t have to put his plans for higher education on hold, and was able to start his pursuit of a degree in civil engineering at Penn State in 1930.

What may have helped, financially, was that he became a reservist with the National Guard in 1933. George continued to serve when he began his working life with Sun Oil Company, and lived for a time after graduation in Harrisburg. In 1935 he was on assignment as an instrument technician at a refinery in San Antonio, Texas.

He became a second lieutenant in the 103rd Observation Squadron, which was the Guard’s first flying unit. In 1939 George got married and a daughter was born the next year. In February 1941, George left his civilian job and was promoted to first lieutenant when the National Guard was federalized. His unit was ordered to active service, performing anti-submarine patrols along the New England Coast. 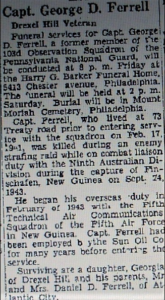 Communications Squadron of the Fifth Air Force Division. He was in the South Pacific in the country of Papua New Guinea in September 1943.

While on duty there in liaison with the Ninth Australian Division, George was killed in a low-flying enemy attack known as a strafing raid. It took almost six years for his body to be returned here for burial. And it was 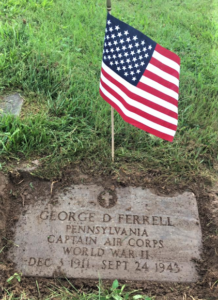 here where his parents would later join him.