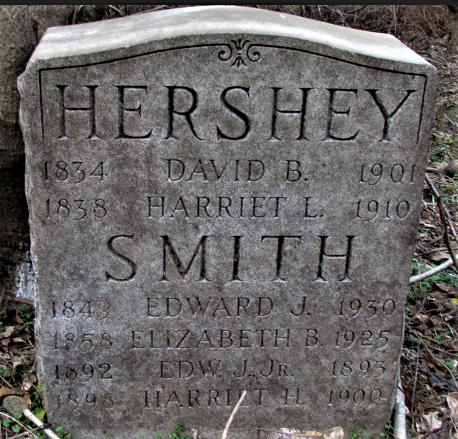 The first thing people ask if your last name is the same as someone famous is if you’re related. David was probably never asked that since his second cousin, once removed, didn’t produce the first Hershey bar until 1900, the year before David’s death. Milton Hershey was one generation removed from David, having been born when David was 23.

Their family roots in Lancaster County go back to when their common ancestor, Christian, was the first in this family to be born in America, in 1719. He was also the first to use the name Hershey; his father, and grandfather, Benjamin and Christian Hersche, were both bishops in the Mennonite Church, and their family arrived in 1717 from Friedelsheim in western Germany, near the city of Mannheim.

David married Harriett Lady in 1857, and the firstborn, Elizabeth, was welcomed in 1858. David’s occupation in the 1860 census was a machinist but by the time he had to register for the draft in 1863 he was already into his nearly 40-year career as a locomotive engineer. Their second daughter, Carrie, was born in 1861 and a son, John Mason, arrived in 1863.

David’s success at his job brought recognition and a certain period of time where he worked in Fort Worth, Texas. 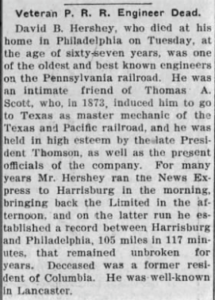 This obituary makes reference to two very prominent individuals; J. Edgar Thomson was president and Thomas A. Scott the vice president of the Pennsylvania Railroad in the 1860s. Thomas Scott in particular envisioned the PRR as a transportation empire. He also took on the role of president of the newly-chartered Texas and Pacific Railway in 1872, and called on David’s expertise to help build it, but the line was never completely finished.

Railroad workers in Pittsburgh rioted during the Great Rail Strike of 1877, and federal troops were called in to end the violence. One newspaper account said David was the first engineer to respond to the company’s call for help, “and it was due largely to his coolness and daring that the Third Regiment… was able to reach the scene of disturbances.”

David’s girls grew up and got married but John Mason was a machinist who remained single and lived with his parents the rest of their lives. David died of kidney failure when he was 67 and Harriett followed in 1910. They share their headstone with daughter Elizabeth Hershey Smith and her husband’s family.