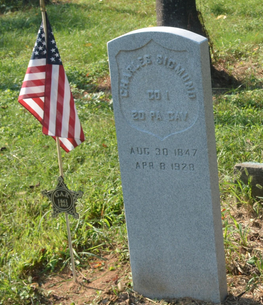 Charles had two sisters and a brother when he was born to John and Sophia Sigmund of Philadelphia. John died six years later, just after Charles’ younger sister was born.

As a teenager, Charles may have begun working as a rookie police officer. When he heard that a new regiment of the Cavalry was being formed in January, 1864, he signed up, convincing the recruiter he was older than his real age of 16.

He was in Company I of the 20th Pennsylvania Cavalry that engaged in battles up and down the Shenandoah River Valley in Virginia through the end of 1864, winning some and losing others. In March of 1865 they joined in the final 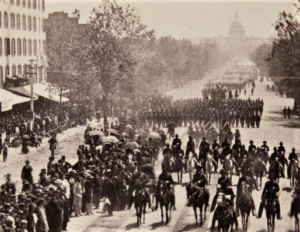 days of battle at Petersburg and in the Appomattox campaign, witnessing the surrender of Confederate troops. Charles participated in the Grand Review of the Armies parading through Washington, D.C. on May 23. Three weeks later, the 20th was consolidated into Company H of the 1st Pennsylvania Provisional Cavalry, which was then mustered out less than a month after that.

Charles married Dorothea Agnes Orth on December 8, 1867, and daughter Dorothea arrived in 1869. A son, William, was born about two years later but only lived about 16 months. Their daughter lived just long enough to marry, but died at age 23.

Charles joined a fraternal organization for veterans, the Grand Army of the Republic, which was formed in 1866. Thanks to their influence, federal pension benefits were made available, and Charles applied for his in 1901.

City directories provide information about his occupation and residence after his discharge. Most addresses were on either side of Broad Street in South Philly. Charles became a cabinet maker, and later his title was “polisher.” He became a piano tuner in 1896 and followed that path for the rest of his life.

Three census reports beginning in 1900 list a boarder living with the Sigmunds named William French, who was a piano polisher. This may explain why Charles left cabinet-making. The relationship was so close that when Dorothea wrote her will in 1902, she named William as co-executor of her estate, a duty he yielded to her husband after her death in 1915.

Charles died on April 8, 1928 of arteriosclerosis, which was the same disease behind his sister’s death less than a year later. After Dorothea died, he had purchased a small headstone to mark her and their daughter’s graves, but there was no headstone for him. Ninety-four years later, his descendants filed an application with the Department of Veterans Affairs, and a military headstone was

placed at his grave, accompanied by a band and color guard, to recognize his service and his life.