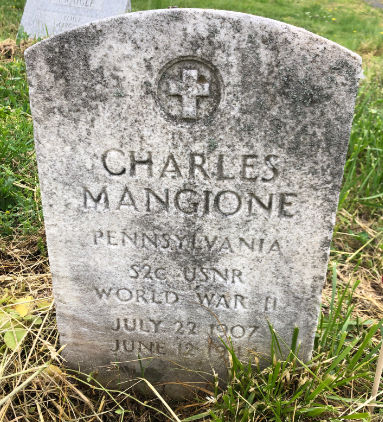 When the U.S. Census was taken in 1910, Charles’ mother was 23 years old with five children under the age of 7, with Charles Jr. being the middle child. Her husband was a tailor and they had two boarders living with them, for a total of nine people in their little South Philly row house on Dickinson Street.

Soon, however, Charles Sr. owned his own tailor shop, and they had a larger home in Passyunk Square. The 1940 census shows Charles Jr., age 33, was still in the same home with his parents, but he had been married for six years with a 5-year-old son, also named Charles. He worked for Curtis Publishing Company in Center City, which produced popular magazines like Saturday Evening Post and Ladies Home Journal.

When Charles joined the Naval Reserve in December, 1943, he was one of the older inductees. After basic training he was assigned in February, 1944 to a destroyer, the USS Nelson, escorting convoys to and from Ireland. 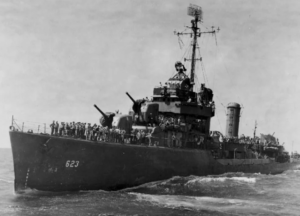 In May it steamed to England to stage for the coming Normandy invasion, where a fleet of destroyers would form a screen around Omaha Beach before D-Day, June 6. Their mission was to fend off attacks by German submarines and E-boats, which were similar to the American PT boat. E-boats were fast, hard to hit, specialized in night attacks, and carried torpedoes.

Due to some unexpected repairs, the Nelson didn’t arrive at its position in the Normandy assault area until June 8. On the night of June 12, a torpedo hit the Nelson and blew off the stern. Nine crew members were wounded and Charles was among 24 who were killed or missing.

His body was returned to his parents in July, 1948. A military headstone marks his burial plot in Section G, Range 13, Lot 2, which is also the location of his parents and a sister. Charles had a brother, Pasquale, who also served in the Navy during World War II. He and another sister are buried about a mile to the west at Holy Cross Cemetery.