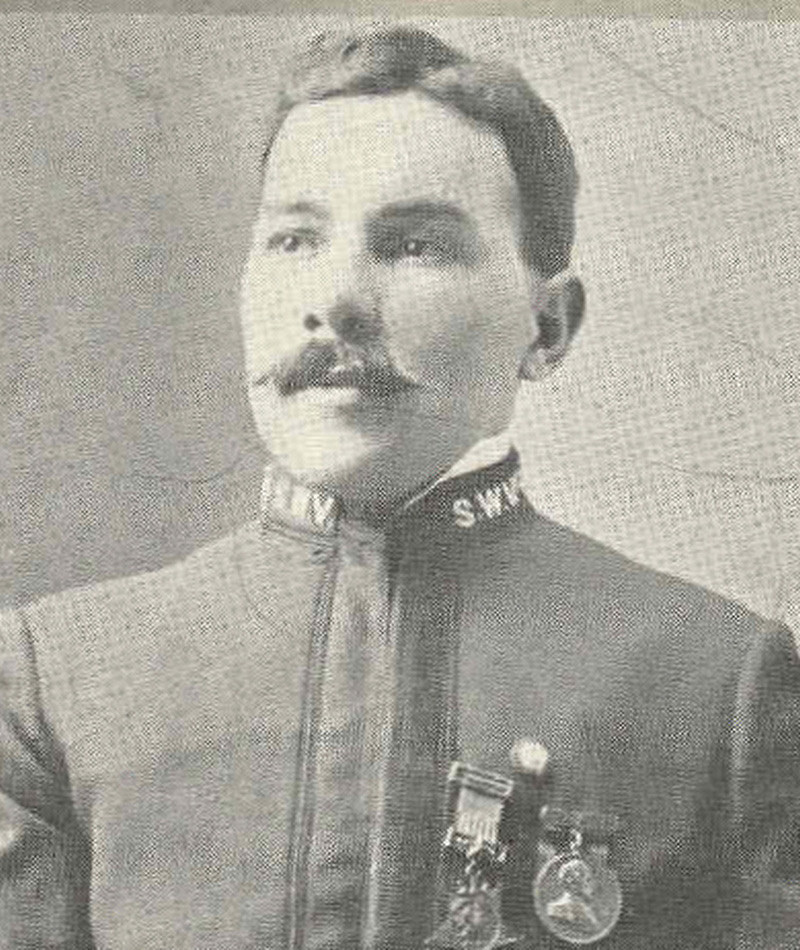 The son of Danish parents, August Peter Teytand was born in St. Croix in the Virgin Islands on April 5, 1878, when it was a colony of Denmark. He came to America when he was 14 and enlisted in the Navy March 28, 1894 in New York. During the Spanish American War, “Gus” was an Apprentice 1st Class on Commodore George Dewey’s flagship of the Asiatic Fleet, USS Olympia, and was present at the Battle of Manila Bayon May 1, 1898.

In that engagement, Spanish naval forces in the Philippines were handed a crushing defeat, securing the Philippines for the United States. It also secured the nation’s role as a major force, not only in the Pacific, but in world affairs. Dewey’s command to the ship’s captain that day became a popular slogan when it was shortened to “fire when ready, Gridley.” In 1899 the ship was decommissioned and Apprentice Teytand was honorably discharged, but he reenlisted two months later.

(The Olympia is the oldest steel US warship still afloat, the only surviving naval combatant of the Spanish-American War, and is moored here in Philadelphia at the Independence Seaport Museum. It was designated a National Historic Landmark in 1966.)

Several major events took place during his next tour of duty. Gus married Louise Vetter on January 1, 1902 and became a naturalized citizen later that year. By this time he held the rank of Quartermaster, 3rd Class, and had served on seven ships. His last was the nearly 40-year-old USS Leyden, an armored steamer used for many years as a tugboat at the Boston Navy Yard.

While at sea on January 21, 1903, it foundered in heavy fog and broke apart on the rocks of Block Island, Rhode Island, the end of a lengthy career. Citations were awarded to Gus and three others, reading: “For heroism while serving on board the USS Leyden at the time of the wreck of that vessel.” (War Department, General Orders No. 145, December 26, 1903). He is one of only 204 medal recipients to be recognized for action in a non-combat role, a practice that was discontinued after 1945. Gus and John Laverty are the only non-combat recipients buried here at Mount Moriah.

After his discharge on October 6, 1903, Gus began civilian life as a house painter. 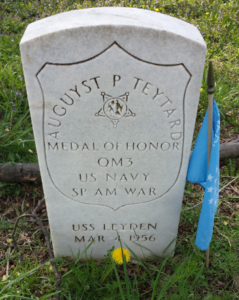 They settled in northern New Jersey where he soon became a successful painting contractor. Their only child, Robert, was born in 1919. After Louise died in the 1930s, he moved to the Naval Home in Philadelphia.

In 1953 Gus posed for a picture in LIFE magazine with 64 other Medal of Honor recipients. They were brought to New York City by the famed newspaper columnist, Walter Winchell, for a fundraiser for the widows and orphans of New York City firemen and policemen.

Gus spent his last years as an “activist” to keep his famous ship from being sold for scrap. Although named for the capital of the state of Washington, efforts to get that state to adopt the vessel failed. A non-profit group was formed in Philly to keep the ship afloat as a museum. This article ran in newspapers across the country in December, 1954: 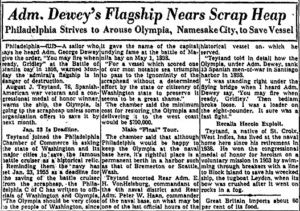 Gus died of stomach cancer in 1956. (His headstone incorrectly spells his name Teytard.) He got to meet his grandson before he died, and would be pleased to know Robert Jr would also serve his country when he grew up to become a staff sergeant in the Air Force.