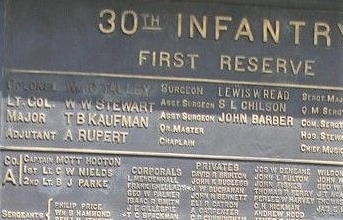 Andy was born on July 18, 1844 in Ireland, and he and his parents, John and Ann, arrived in America around 1845. His mother died when he was 7 and his father remarried a widow of three older children who would then give birth to three younger children. As a teenager he began to learn about making wooden barrels from his step-sister’s husband.

Andy reported his age as 19 when he joined the first company formed under the 30th Pennsylvania Infantry. He served from 1861-64 and saw plenty of action for someone who was really only 17 when he enlisted. Although given the rank of  private, he was listed in one document as a “wagoner.” This meant driving a wagon and doing all the things that come with it: loading and unloading, feeding and caring for the animals, fixing things that broke, and more. (Another term for driving the teams of horses was “teamster,” still in use today to describe someone in the transportation industry.)

His Company A shared the agony of defeat at Bull Run near Manassas, Virginia and the thrill of victory at Antietam, Maryland. To illustrate the role of wagons, Andy’s was just one of 4000 that were part of the Army of the Potomac on the march to Fredericksburg in September 1862. That’s what was required to supply and sustain 100,000 men on the move. After that, the 30th spent the first six months of 1863 in defenses around Washington DC.

The most famous (and bloodiest) battle of the war was at Gettysburg, and Andy was there. In three days of battle 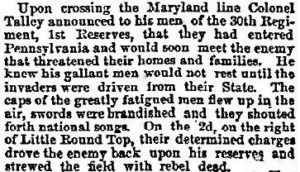 10,000 were dead and 30,000 were wounded. Years later a newspaper article included this recollection of how the 30th participated, and how  driven they were by their patriotism.

The biggest monument erected at Gettysburg is the Pennsylvania Monument, and around its base are a series of large plaques naming 34,540 Pennsylvanians who took part in the battle. The plaque for the 30th lists all ten companies, and this photo shows Andy’s name in Company A in the lower right corner.

After Gettysburg, Andy’s regiment was limited to northern Virginia until most of them were mustered out the following June. Andy and some others were transferred to the 190th Infantry as the assault on Petersburg was beginning.

Presumably he was discharged at the end of his term in July, but no documents reveal the exact date. Andy returned home for a long civilian life as an oak cooper, also known as a barrel maker. He got married and had five children but only two lived to adulthood. From 1878-1884 he was a Philadelphia police officer before returning to the barrel business. He died in 1919, and his wife joined him nine years later.