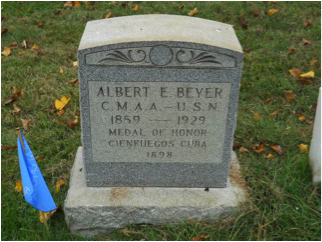 Born in Hanover, Germany on June 13, 1859, Albert came to America when he was about six years old. He listed his hometown as Boston when he joined the Navy in 1884 at age 24. His enlistment took place in Philadelphia, but there is also documentation that he was a Brooklyn resident when he became a naturalized citizen on July 22, 1897. At that time Albert was still a seaman, and soon went aboard the USS Nashville, a gunboat commissioned that same year. He became a coxswain, responsible for navigation and steering the ship. 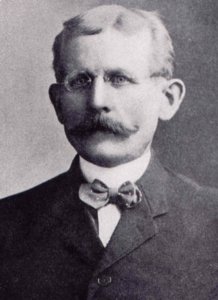 The crew was ordered to the Caribbean in March, 1898 when the United States became involved in Cuba’s war for independence from Spain. Between April and August (the duration of the “Spanish-American War”), the Nashville captured four Spanish vessels. In May it joined with the USS Marblehead to destroy undersea telegraph lines used by the Spanish Command to communicate throughout the island. Crews pulled up two 2-inch cables and cut through them while both warships provided cover by firing on the Spanish troops onshore.

Albert was one of 52 sailors and marines awarded the Medal of Honor as part of this mission, with this citation:

“The President of the United States of America, in the name of Congress, takes pleasure in presenting the Medal of Honor to Coxswain Albert Beyer, United States Navy, for extraordinary heroism in action on board the U.S.S. Nashville during the cutting of the cable leading from Cienfuegos, Cuba, 11 May 1898. Facing the heavy fire of the enemy, Coxswain Beyer set an example of extraordinary bravery and coolness throughout this action.” (War Department, General Orders No. 521, July 7, 1899.)

Albert remained with the Navy until retiring with the rank of Chief Master-at-arms (CMAA) on August 20, 1913. In the Navy, this rating is responsible for law enforcement, equivalent to the chief of military police in the other branches of the Armed Forces. The 1920 census records his residence at the US Naval Home (formerly the Naval Asylum) in Philadelphia, where he remained until his death on October 29, 1929.