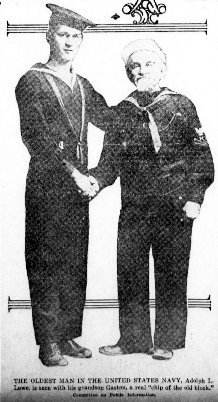 Adolph Lowe was born to William and Caroline Lowe in August of 1840 in Prussia. In March of 1861, at age 20, Adolph enlisted in the US Navy and was stationed on the USS North Carolina. In July of that same year, and still before his 21st birthday, he declared his intention to become a citizen and renounced his allegiance to the King of Prussia (at this point in history, Prussia was still a monarchy). He served the duration of the Civil War on some of the first gunboats built by the US Navy including the Wabash and the Seminole. Just a month after Adolph enlisted, President Lincoln issued the Proclamation of Blockade Against Southern Ports thereby preventing the trade of supplies, weapons and goods by the Confederacy. The initial phase of the blockade targeted ports along the east coast. Lowe participated in the pivotal Battle of Port Royal (Port Royal Bay, South Carolina). This was one of the first battles of the blockade and also one of the earliest naval operations of the Civil War. This early victory gave the Union a strong base for the remainder of the war.

Adolph was discharged from service in June of 1864. He suffered various injuries during the war including impaired hearing. These injuries, however, did not keep him from re-enlisting in the Navy in 1917 when the US officially announced its declaration of war against Germany. The Pennsylvania Veterans Burial Cards show he spent a total of 4 years, 6 months and 3 days in service to his adopted country.

The notice of his death in 1922 provided the following information. He was recognized as one of the oldest Naval veterans in Philadelphia. Mr. Lowe was survived by his wife Rose, five sons and two daughters. He spoke eight languages fluently, attended the Lutheran Church and was a member of the Grand Army of the Republic (GAR), a fraternal organization of Civil War veterans. In addition, he was a member of the Virginia Beach Masonic Order and the American Legion. His funeral services were conducted by the American Legion at the Naval Home on Gray’s Ferry Avenue with interment at Mount Moriah Cemetery.