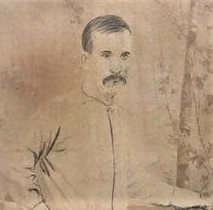 William grew up with two sisters at 2520 Manton Street in the Grays Ferry section of Philadelphia. Three brothers and a sister died in infancy.  His father’s name at birth was Erwin Bockius Jr. but the 1900 Census lists him as Irvin Buckius, and Sophie, William, and Sarah grew up with that new surname.

By 1915 William’s sisters were married and he was working as an ice wagon driver. He registered for the draft in June, 1917, where he was described as 5’6” and “stout,” in contrast to this studio portrait, which may have been taken several years earlier.

time, and he died of pneumonia on October 2, although this newspaper account gives an incorrect date and last name.

The death of William’s mother, Elizabeth Hornkeith Bockius has been erroneously reported in several sources as 1922, even though a woman named Elizabeth Hornkeith was buried that year at Mount Moriah in Section 22, Lot 261. In fact, William’s mother actually signed her husband’s death certificate in 1925 and applied for her son’s veterans pension in 1934 while living with Sarah’s family in Atlantic City. The correct  date of death and burial location has not been determined.