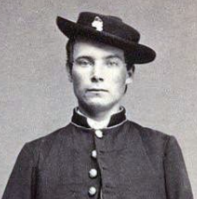 Military documents say Willie’s last name was Sergent, civilian records say Sargent, and there are two other variations. His birth was most likely in 1843, given the fact that his confirmed age was 27 and his death was in the first three weeks of 1871. His hometown hasn’t been identified with certainty although he enlisted in the central Pennsylvania town of Winfield and was mustered into service in Harrisburg. 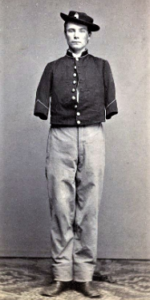 Willie was 18 when he joined Company E of the 53rd Pennsylvania Infantry on November 7, 1861. Their first major action was the Battle of Fair Oaks (also called the Battle of Seven Pines) on June 1, 1862. The 53rd was initially disorganized but went into the thick of the fighting. Willie was shot in both arms, both of which had to be amputated.

How does a soldier function as a double amputee? The details aren’t known, but Willie wasn’t discharged until his three-year term of service was up in November, 1864. After physical healing took place, what kinds of things could Willie do behind the scenes, relieving someone else who could be assigned to the front lines? Not to be overlooked is the long-term healing necessary for what today is known as post-traumatic stress.

Considering that three out of four surgeries during the war were amputations, the demand for prosthetic limbs increased dramatically. Most were crude but anything was better than nothing, since in those days a man who was an “invalid” was not considered a “valid” part of society. Willie may not have had that luxury of an artificial arm, but he was given the opportunity to have this portrait taken. It has since been added to the Library of Congress and widely used to symbolize the tragic effects of the war. There is some evidence that at age 23 he found work as a teamster, or wagon driver.

Legislation signed by President Lincoln created what came to be known as the National Home for Disabled Volunteer Soldiers. Three branches had opened by 1867 and Willie was admitted to the branch in Dayton, 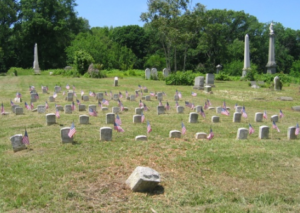 Ohio in 1869. Meanwhile, a grassroots movement had been established in Philadelphia to operate a Soldier’s Home. Somehow, Willie left Dayton for the home in Philly but shortly afterward he died of tuberculosis. He was buried in the Soldier’s Home section of Mount Moriah, shown here, although his headstone is missing.