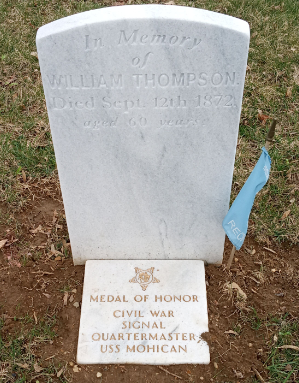 Born in 1812 and growing up next to the ocean in Cape May County, New Jersey, William could only imagine sailing on a ship like the ones he saw so often. He got his chance when he enlisted in the Navy in 1837 and would log 25 years of service. His rank was Signal Quartermaster on the USS Mohican during his last tour of duty, from July of 1859 to July of 1862. It had just been launched and was first assigned to the African Squadron. She cruised on patrol against pirates and slavers off the west coast of Africa.

When southern states began to secede from the Union in April, 1861, the Mohican was sent to take part in blockading the southeastern Atlantic coast, cutting off supplies to southern ports. At Beaufort, South Carolina, two Confederate forts were quickly built on Port Royal Sound to protect the passage of ships. Fort Walker was on Hilton Head Island to the south and Fort Beauregard was on Phillip’s Island to the north.

On November 7, 1861, a fleet of 77 Union vessels began their approach and kept moving in an elliptical path,

bombarding Fort Walker on one leg and Fort Beauregard on the other. Their successful bombardment forced the Confederate troops to abandon the forts. William was awarded the Medal of Honor for his bravery under fire:

“Serving as a signal quartermaster on board the U.S.S. Mohican, Thompson steadfastly steered the ship with a steady and bold heart under the batteries; was wounded by a piece of shell but remained at his station until he fell from loss of blood. Leg since amputated.”

The Battle of Port Royal was the first major naval battle of the war, and his medal was one of the first for a Union Naval Officer. William left the service in 1862 and received his award on July 10, 1863. How he spent the next few years is unknown except his last years were spent at the Naval Home in Philadelphia. He was admitted to the Naval Hospital on July 26, 1872 with acute rheumatism, and died there six weeks later, on September 12.