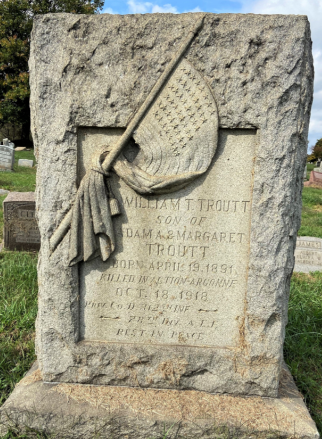 Born in 1891 in Philadelphia and the ninth of ten children, William had a lot of older siblings to guide him as he grew. After the turn of the century the family moved across the river to the borough of Audubon in Camden County, New Jersey. As an adult he became an expert in wall coverings as a self-employed paper hanger, and he became an officer in the local fire department. Both parents died before he was drafted in February of 1918.

Private Troutt left for France in May with Company D of the 312th Infantry, attached to the 78th Division of the American Expeditionary Forces. This was just one of nine divisions that assembled along a twenty-four mile front from the Argonne Forest to the Meuse River, about 150 miles east of Paris. The Meuse-Argonne Offensive began September 26th and brought about the end of the war. 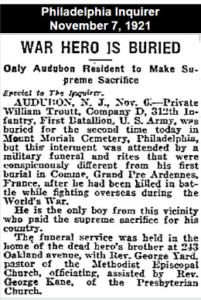 William’s platoon was advancing through a farm when he caught a machine gun bullet and died October 18th. They buried him there with his dog tags attached to a wooden cross, but his body came back to his hometown in November 1921. Audubon’s only son to be lost in combat was given a military funeral attended by most of Audubon’s veterans who served in the war. A parade was held by the local American Legion post, and they even renamed their unit the Murray-Troutt American Legion Post 262 in his honor.