This Philadelphia native served his country for almost eleven years, starting right after he got married in 1940. Bill was an only child whose father died in 1937 and step-mother died in 1939. He was working at Sinclair Refining Company when he registered for the draft on October 16, 1940 and was drafted November 8.

At 136 pounds he was an ideal size as a radio operator with the 345th Bombardment Squadron in the Army Air Force, with the rank of technical sergeant. He deployed to Egypt for a year in 1942 where the squadron attacked targets in Italy and Romania and cut supply lines to North Africa. In 1944, he  participated in the invasion of southern France and raids on southern Germany and Austria.

The squadron returned to the United States in May 1945 after participating in over 100 missions in Europe. It was redesignated as a B-29 Superfortress heavy bomb squadron and began training for deployment to the Pacific Theater. That came to an end when the unit was inactivated July 29 and Bill was honorably discharged. However, he decided to submit a new draft registration card on August 2 and returned to active duty for a three-year hitch.

The rank of technical sergeant was eliminated after the war so he became a staff sergeant. He reenlisted again in 1949, this time with the 64th Bombardment Squadron attached to the 43rd Bombardment Group of the United States Air Force stationed in Arizona.

The growing conflict in Korea meant a return to bombing runs. On October 14, 1951 Bill was returning from a mission in Korea when his plane crashed in Japan. There are several 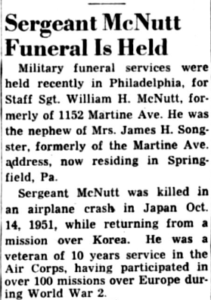 abbreviations on his gravestone that indicate he was decorated with the Distinguished Flying Cross Air Medal with three bronze oak leaf clusters, and he was posthumously awarded the Purple Heart.

Staff Sergeant McNutt was given a military funeral and buried the week after Thanksgiving, leaving behind a wife, an 11-year-old daughter, and a grateful nation. 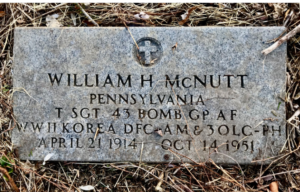