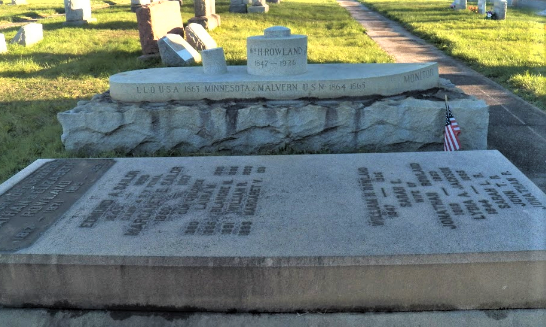 If a contest were held to determine the most unique gravestone at Mount Moriah, this would most likely win. The marker is shaped like the Union ironclad USS Monitor on a slab that was cut to resemble ocean waves. William and several members of his family are listed on the slab next to this stone.

He and his parents, Jonathan and Sarah, and four siblings were born in Delaware, moving to Philadelphia around 1853. There were six children in 1855 and all were  baptized at St. Paul’s Episcopal Church that year. Two more were added to the family by 1860. 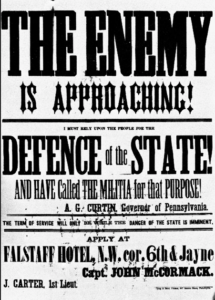 Reports in the spring of 1863 that Confederate General Robert E. Lee might be planning to lead his troops across the Mason-Dixon line into Yankee territory spread throughout Pennsylvania. The governor was so alarmed he called for volunteers to form emergency militias to defend their state. William, age 16, signed up on June 30 for Company G of the 44th Pennsylvania Militia. The unit was formed too late to see any action, since the battle at Gettysburg was over July 3, but he wanted to do more. The company was disbanded on August 27, so William joined the Navy in September.

After basic training on the USS Princeton, which was moored at Philadelphia as a receiving ship for new recruits, he served on both the USS Minnesota and the USS Malvern where his job title was “coal heaver” until his discharge in August, 1865. Both ships were part of the North Atlantic Blockading Squadron, and both participated in the capture of Fort Fisher, North Carolina in December 1864 and January 1865. How long Seaman Rowland was on each ship is unknown. Also unknown is why this replica of the Monitor carries his name. The Monitor fought beside the Minnesota on only one occasion and that was 18 months before William even joined the Navy.

They were part of the Battle of Hampton Roads, or the “duel of the ironclads,” in March, 1862. The Confederate ship Virginia (formerly the Merrimack, refitted with steel plates) engaged a Union flotilla blockading the James River. The Minnesota had run aground, but the Monitor came to the rescue, exchanging fire with the Virginia for four hours. Neither vessel sustained any significant damage, and while the Union blockade remained in place, the fight was considered a draw. 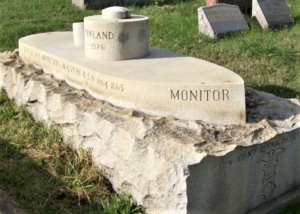 The connection between William and the Monitor remains unknown. His name and the year he was born and died are inscribed here on the turret, and his years of service on both the Minnesota and the Malvern are depicted on the side. The front of the monument reads “Gen. John F. Reynolds Post No. 71,” which was the local post of the Grand Army of the Republic, the veterans’ fraternal organization to which William belonged. Were they responsible, perhaps in partnership with William, for creating a stone replica? It is as curious as it is unique.

After the war, he made his career as a molder, machinist, iron worker, and, as described on his death certificate, a brazer, which is similar to a welder or solderer. William was living in Germantown in the 1870s and 1880s, but by 1900 he was living with his widowed sister, Margaret Sailor and her large family at 2031 South 6th Street. That same year, at the age of 53, he finally tied the knot with a 23-year-old named Catherine “Kate” Theresa Smith. From then on, most documents except his death certificate refer to him as Henry William Rowland. They lived in Camden where she gave birth to two children, but she died of liver cancer in 1914. He buried her here in Section 11, Lot 49.

Margaret outlived William and the other siblings, and it appears she placed the stone next to the ship replica. It memorializes her and her husband and children, the Rowland parents, William, and four other siblings, all in this family plot.