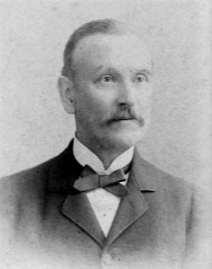 It could be said that this man may have once said that famous phrase, “Do you want fries with that?” after he was issued a patent for the “Hodges Handy Fryer” on July 8, 1879. The next year he began manufacturing this deep fat 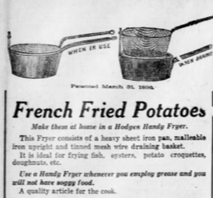 French fryer with a wire basket, along with other kitchen specialties, under the name “William Hodges and Co.”

William married Mary Watson in 1856. They had three boys and three girls, but only one boy and two girls lived to adulthood. After Mary died of cancer in 1887 he married Theresa Toner the following year and had two boys that lived and one girl that didn’t.

His original store was 9-11 South 2nd Street in Philadelphia. The business grew to include a store at 109 Arch Street, and two factories he called “the Wireworks” were located in Fisher and Camden New Jersey. He would take the ferry across the Delaware River to visit his factories. The products sold were primarily targeted to commercial kitchens.

In 1910 the person who responded to the census taker said  William was a hardware storekeeper, but that may have been the maid who understated his job. His sons William Jr. and Walter were living in the home and were listed as salesmen in the hardware store. Both sons made their careers working in the business, listing their jobs in later years as manufacturers and importers of kitchenware.

Their father died October 9, 1915 of a disease of the central

nervous system that affected his ability to walk. Both of his wives and seven of his nine children and some of their families are buried with him in St. John’s Circle with modest headstones. His oldest son, Edward, is in Section D with his wife and daughter. 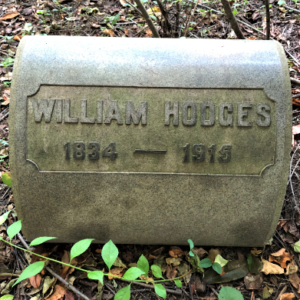 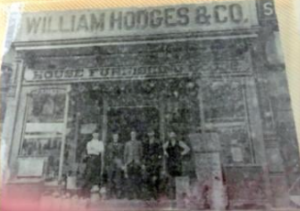