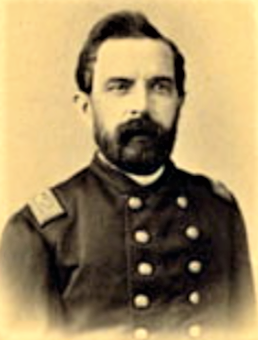 An often-overlooked fact of the Civil War is the great number of amputations performed on wounded soldiers. Estimates range from 25-30,000 men on each side dealt with the loss of one of his extremities, and the fatality rate after such an operation was about 27 percent.

William Ward was one of the survivors. Born in Delaware, he was living in New Jersey when he was recruited as captain of Company D of the 8th New Jersey Infantry on September 27, 1861. His knowledge, skill, and experience in leadership would be put to the test.

The 8th left Trenton with 889 men. The first major engagement was at the Battle of Williamsburg in May, 1862 when about 200 were killed or wounded. That was followed by the Battle of Seven Pines later that month. Captain Ward’s success with Company D led to his promotion to Lieutenant Colonel on August 1, and his transfer to Company S.

He felt the cost of leadership, however, just one month later. His outfit was engaged in the Second Battle of Bull Run near Manassas, Virginia when he was shot in the left arm. It had to be amputated, but Colonel Ward returned to service, although to what extent is unknown.

By the time they went into battle at Chancellorsville in May of 1863, the regiment was down to only 242 men, and they left there with only 108 of the original 889. William remained with the 8th until he was mustered out of the unit in September, so it’s assumed he participated in the bloodiest battle of the war, at Gettysburg. As with other regiments, their ranks began to grow after that, due to the newly instituted draft.

William made a life for himself when he returned to civilian life in Philadelphia and got married. Fortunately, he didn’t let his disability stop him from working. He became a “moulder,” someone who fabricates a mold for cast iron parts and pours molten iron into it to harden.

As difficult as it was getting used to working with one arm, it was a worse shock when his wife Emma died in 1869. He was left alone and childless, remaining single the rest of his life while working with iron molds. He took on a job in his later years that was somewhat related, that of blacksmithing. The death certificate lists the cause of death as cirrhosis of the liver.