“Mickey Duffy” was born in the Gray’s Ferry area of Philadelphia to Polish immigrant parents. His given name was either Michael Joseph Cusick or William Michael Cusick. In an attempt to gain acceptance with the Irish gangs of his home town, he used a variety of names, finally settling on Michael “Mickey” Duffy. His life of crime began with petty thefts and various misdemeanors as an adolescent but he quickly rose through the ranks to become one of Philadelphia’s most notorious gangsters.His first arrest came in 1908 and, throughout his lifetime, he would serve jail time for a variety of offences including an almost three year stint at the famed Eastern State Penitentiary for assault and battery with intent to kill. The era of prohibition was in full swing when he was released from Eastern State and Mickey easily found his way in the world of booze smuggling, bootlegging and brewing. He operated several breweries in Philadelphia, Camden and South Jersey. These lucrative operations allowed him to invest in more traditional, legitimate businesses including the fashionable Club Cadix on Chestnut Street. While leaving the chic club on February 25, 1927, Duffy and his bodyguard, John Bricker, were met with a hail of gunfire, reportedly the first gangster “Tommy” gun shooting. Bricker was killed, the club doorman was seriously injured and Duffy was hit multiple times. He was taken to Hahneman Hospital where he was given last rites. Newspaper stories of the time report that Mickey was not expected to live, but he was back to his gangster work within weeks of the shooting.

Duffy maintained luxurious suites in Philadelphia’s Ritz Carlton, The Walt Whitman Hotel in Camden and the Ambassador Hotel in Atlantic City, but home for Mickey and his wife Edith, a former hat check girl, was a Lower Merion mansion on City Avenue. The home was built in 1929 as an architectural showcase by the firm of McWilliams and Maloney at an approximate cost of $90,000. It was purchased by the Duffys in 1930 and Mickey added some personal touches to the home including wiring the doors and windows to a central alarm system, reinforcing some doors and walls with steel plates, installing floodlights in the shrubbery and building a secret room with steel walls. The Mediterranean-style home was known as “The House of the Black Palm” or “The Black Palm Castle” due to its trademark black metal palm tree which spread across the stucco facade of the mansion. The home changed hands several times in the decades after Duffy’s death and no longer stands. It was bulldozed in 1970, taking with it the colorful memories of its notorious original owner.

Throughout his life, Mickey Duffy was known as a hoodlum, racketeer, beer baron, ex-con, gangster, bootlegger, hijacker, thief, and smuggler. In 1930 he was dubbed “King of the Numbers Racket” by Philadelphia District Attorney John Monaghan and for a brief time was known as Public Enemy #1 in Philly. His lavish lifestyle included his magnificent home, fancy cars, fashionable clothes and flashy jewels for his wife. He lived the life of a crime “big shot” and apparently made some enemies along the way. On August 30, 1931 while sleeping in his suite at the Ambassador Hotel in Atlantic City, Mickey Duffy was murdered. There was speculation that he was killed by his own associates in an attempt to seize his power and business. Although police investigated the murder and had an array of suspects, no one was ever charged with the murder. The funeral for Mickey Duffy was a big deal. Thousands of people lined the street to see his funeral procession. Police turned away spectators and only family and friends with a special pass were allowed to enter. The next day, a 31-car procession accompanied Duffy’s body to Mt. Moriah Cemetery where he was reportedly buried in a solid bronze coffin. After the burial, souvenir hunters removed flowers from the hundreds of floral tributes left at the grave site.

Interestingly, Duffy’s personal estate was valued at only $6,000. Administration papers showed $5,000 worth of personal property and $1000 equity in a home on Osage Avenue in Philadelphia. In 1932 several tax liens were levied against the estate and in 1933 the funeral director who buried Mickey sued the estate to recover the funeral costs. Unfortunately by that time, Mickey’s widow Edith could not be located.

The HBO series Boardwalk Empire has a character named Mickey Doyle who is based on the real life Mickey Duffy. 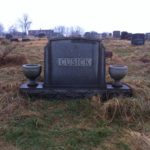 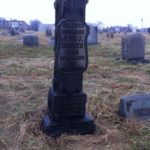