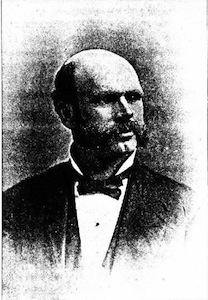 William Burns Smith was born in Glasgow, Scotland and arrived in the United States with his parents when he was seven years old. At age 11 he apprenticed to the trade of woodcarving. At age 25 he began a 14 year service with the Philadelphia National Guard, Co A, First Regiment and rose to the rank of major of the Veterans Corps. He was also a 32 Degree Mason. On April 7, 1884, Smith, a Republican, was elected Mayor of Philadelphia, serving from 1884 to 1887. One of his first actions as Mayor was to install telephone service between his home, his business and the mayor’s office so he was able to be notified of city activities, events and anything that required his immediate attention 24 hours a day. In November of 1884, Smith received a request from the mayor of New Orleans requesting the loan of the Liberty Bell to the World’s Industrial and Cotton Centennial Exposition. Mayor Smith approved the request and permission was granted by the Councils of Municipality for the famous bell to travel to New Orleans “as a gesture of goodwill and solidarity”.