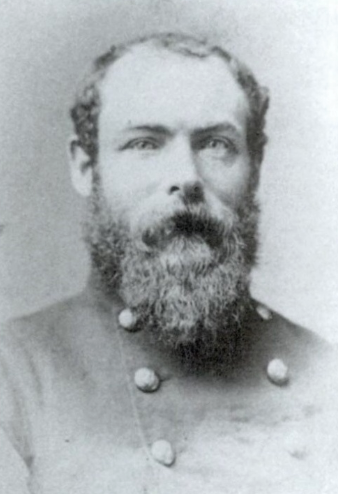 William came to America in 1840 from County Donegal, Ireland but his parents died when he was young so he grew up in his uncle’s family in Philadelphia. He studied law and joined the Philadelphia Bar Association in 1858.

When he learned of the rebellion taking place in the South, he delayed only a month before enrolling on May 27, 1861 in the 31st Pennsylvania Infantry, also known as the 2nd Pennsylvania Reserves. Perhaps because of his education he was given the rank of Major when he was mustered in on June 21. After outstanding leadership was shown in an engagement at Mechanicsville, Virginia that fall, he became Lieutenant Colonel McCandless. With high praise from those above and below him, he rose to Colonel in August, 1862. At the end of that month, at the second battle of Bull Run, he took a bullet through the groin and took six months to recuperate.

Buck returned to leading his regiment, as well as the 1st Pa. Reserves at Antietam and Fredericksburg. He took charge of the brigade during that battle when the commander was wounded, and would remain its leader for over a year and a half. He led a counter-attack at Gettysburg, taking 200 prisoners and the flag of a Confederate infantry. That led to a recommendation for a promotion to Major General but he humbly declined.

As he was nearing the end of his term in May, 1864, Buck was leading another charge in the Wilderness campaign when he was captured, but he escaped. At the Battle of Spotsylvania he was wounded in the arm and one source says it had to be amputated. Another promotion, this time to Brigadier General, was declined and he returned to his law practice, although he was referred to as “General” for the rest of his life.

Politics becomes an attraction for many lawyers. For Buck it was a seat in the State Senate, which he won in 1866. After an unsuccessful run for State Auditor in 1871, he won election to a newly created state office, the Secretary of Internal Affairs, serving from 1875-79. He also made a failed attempt at a Congressional seat in 1878.

His health began to fail in 1882, and the cause of death two years later was listed as jaundice. Police officers had to contain the crowds that came to pay their respects, including the governor and many state and military officials, and former members of the brigade he led. An obituary in the New York Herald read, “As an officer he had won great distinction, and was a favorite with his companions in arms, who now deeply feel his 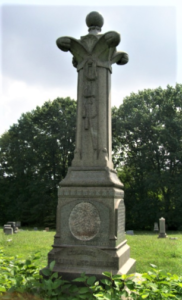 The domestic side of the General’s life came into question after his death. There was no will, which is surprising, given his occupation. He was supposedly married in 1871 to Annie, whose maiden name also happened to be McCandless but it may have been a common law marriage.  The value of his estate, at $5000, was surprisingly modest, but his brother John filed a motion to be the rightful administrator, claiming the couple was never married. Lawyers argued the case in court but the outcome is unknown. What is known is that nine people named McCandless, including three named John, now fill the plot on the west side of Cobbs Creek in Section 107.