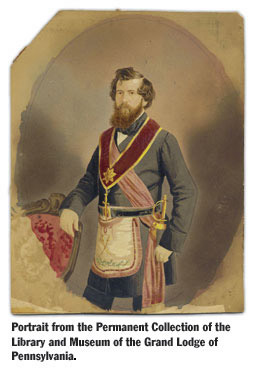 Grand Tyler of the Grand Lodge of Pennsylvania, William Bockius Schnider was born in Philadelphia Pa. and was a bricklayer by trade.

According to Dr. Glenys Waldman, Librarian, The Masonic Library and Museum of Pennsylvania, the first Masonic record of William was in 1838 at the age of 21. He became an Apprentice in March. From other sources, it was determined that he obtained the Fellow Craft degree in April, then Master Mason May 7 at a Lodge of Instruction held by the Grand Lodge. Within his Lodge, apparently he was never Junior Warden, but was elected Senior Warden in December 1840 and Worshipful Master in 1841. He was also a member of Jerusalem Holy Royal Arch Chapter No. 3, of which he became High Priest in 1843. He is shown to have gained membership in Knights Templar, St. John’s Commandery No. 4, as of June 1848, and Scottish Rite, July 11, 1857.

Schnider came from a long line of Masons, his grandfather had been Grand Tyler for 21 years, his father Charles assumed the position in 1823 and held it for 18 years before passing away in June of 1844, at which time William was appointed the same title. He served in this capacity until his death. He left behind a widow and 9 children. Following his death, his oldest son Charles was appointed Grand Tyler and held the position for 6 years until 1873 when he died from Meningitis at the young age of 29. For 68 continuous years the Schnider family held the title.