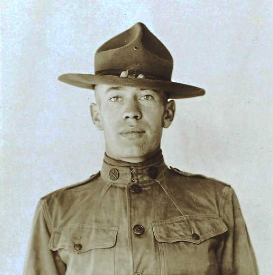 This family has a legacy of service to their country through the parents of Walter Sr. He was the oldest of six children born to William Hunterson Henrie and Elizabeth Fry Henrie. His father’s mother, Sarah Etter, was the great-granddaughter of Pvt. Philip Etter of Philadelphia who served in the Revolutionary War. Through his mother, Walter Sr. was the fourth-great grandson of John Keyser who also served in the Revolution, enlisting in Philadelphia on July 27, 1776.

Walter’s father was a Pennsylvania Railroad brakeman who died tragically in 1905 at the Reed Street Wharf on the Delaware River, when he was crushed between two rail cars. The family was taken in by William’s parents, and William’s widow, Elizabeth, found work as a hairdresser. Walter quit school to be a messenger for Philadelphia Gas Works, then became a machinist for Baldwin Locomotive Works in Eddystone. In 1914 he joined the Pennsylvania National Guard and was a Sergeant when the Great War began.

Walter joined Company H of the 109th Infantry on June 23, 1917, which then shipped out to France in May, 1918. On the third day of a three-day Battle of the Marne in July, he was wounded by shrapnel. After leaving the Army in 1919 he married Matilda Anderson at the church where he grew up, Mutchmore Memorial Presbyterian Church, 18th and Montgomery Avenue, near Temple University. They lived with his uncle and aunt until Walter found work as a machinist. He would later be the proprietor of an auto battery shop until his death in 1953.

Their daughter was born in 1920 and they moved to 1424 South Etting Street in the Grays Ferry section of the city, where they lived the rest of their lives. She was named Sarah in honor of his grandmother (and/or Matilda’s mother) and Elizabeth in honor of his mother, but she died of a brain tumor in 1930. She is buried with Matilda’s parents here at Mount Moriah in the same plot as Walter and Matilda. Their son, Walter Jr., served in World War II and is also here in the family plot.