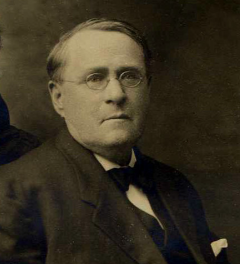 A father and son in the same business is a tradition as old as history itself, passing one’s vocation to the next generation. The most common example is farming, but it occurs with most any trade, skill, or profession, from mechanics to ministers to medical doctors. This is the story of not one medical doctor but eight, spanning four generations of their family tree and 180 years.

It centers on a man with an unusual first name, Vanroom Robin Tindall, born on August 8, 1839 in Salem County,

New Jersey. He was the firstborn of Thompson W. Tindall, shown here, and his wife, Margaret, but it was Thompson’s younger brother, Daniel, who was the first doctor in the family. Their ancestors first arrived in the late 1600s in that part of South Jersey where the river begins to widen into the Delaware Bay. At least some of them were Quakers and some followed John Wesley to the ranks of the Methodists’ beliefs.

Where he received his medical training is unknown, but in 1852 Dr. Daniel M. Tindall set up his practice in the Germantown section of Philadelphia before relocating to the Southwark neighborhood. About seven years later Thompson (which was his mother’s maiden name) decided to relocate his family just across the river to Wilmington, moving their long-standing membership from Broadway Methodist Episcopal Church in Salem.

The 1860 census reports that “Van” had two brothers and six sisters. His father was a brush maker his entire life and Van was a painter at the time, but his calling was to medicine. In 1861 he acted on that calling and began his education, moving to Philadelphia to live with the uncle who inspired him. 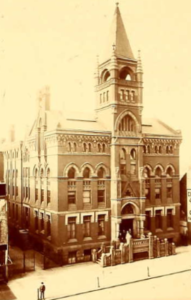 Homeopathy is an “alternative” method of treating disease based on the idea that using small amounts of a drug that causes symptoms of a disease in healthy people can cure similar symptoms in sick people. Considered “quackery” and no longer taught today, it grew in popularity in the mid-19th century, and Van and his uncle were ardent promoters.

[With the decline of homeopathy in the 20th century, Hahnemann re-invented itself as a nationally known academic medical center. The school became part of Drexel University’s College of Medicine, and the hospital was the college’s primary teaching hospital until it was sold, later went into bankruptcy, and closed in 2019.]

Van was 21 when the Civil War began, but in early 1963, concern grew among Pennsylvanians that Confederate forces could actually invade the Keystone State. In June the Governor asked for volunteer militias to defend the homeland in such an emergency. Hundreds volunteered, most having no training, and among them was Van, who enlisted July 2 in Company C of the 40th Volunteer Infantry. Ironically, that “invasion” had already occurred by then and the Battle of Gettysburg was over July 3. The rebels never crossed the Mason-Dixon line again, but as a precaution, most of the militias weren’t discharged until a month later. So, after an eventful summer, he returned to his classes.

After graduating with 12 others in 1864, Van stayed in the city and worked alongside his uncle. Not long afterward, he took Lavinia Godshall as his wife and they had six children by 1877. In 1870 they lived briefly in Woodstown, New Jersey, where he practiced on his home turf of Salem County, but he probably found business was slow compared to the medical needs of a big city.

They returned to Philly after three years and eventually settled at 240 Federal Street. City directories listed him working with his uncle at times, or in his own practice out of his home. By the new century that address changed to 323 Reed Street, and later to 1613 South Broad Street. Lavinia was only 48 when she 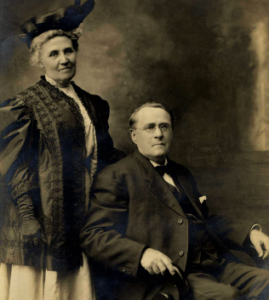 died of cancer in 1884. The children needed a mother, so Van followed an ancient custom when he married Lavinia’s younger sister, Annie Collins Godshall, on June 6, 1885. This photo of Annie and Van is probably from the dawn of the 20th century.

Much to Van’s delight, three of his boys chose careers as physicians. The oldest, Charles, was in the Class of ‘88 from the University of Pennsylvania, apparently following the traditional study of medicine. He got married and worked in his father’s practice for a dozen years. Around the turn of the century, two of his three children died in infancy, and his own life was cut short when he died of laryngitis in 1903. The attending physician was his father, who signed the death certificate for his 36-year-old son.

Born just 20 months after Charles, Harry Brooks Tindall graduated from his father’s alma mater in1890, did an 18-month residency at Pittsburgh Homeopathic Hospital, and had just become a partner with his father when he caught typhoid fever. An intestinal perforation led to his death on January 9, 1892 at age 23.

Van’s youngest son, Percy, also graduated from Hahnemann Medical College. When he was 22 years old he began working for the government of the District of Columbia, having been named Assistant Resident Physician of the National Homeopathic Hospital there in 1899. In 1904, Percy married a girl from Salem at his family’s former church, Broadway United Methodist, and they had their only child in 1908. They moved to 822 Wynnewood Road in the city’s Overbrook Park section in 1915. A newspaper article in 1917 said he was on the staff of Children’s Homeopathic Hospital in Philadelphia, shown here. 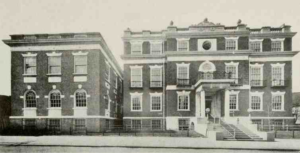 It was later renamed St Luke’s and Children’s Medical Center, then Girard Medical Center. As his career progressed, however, he specialized in diseases of the eyes, and another newspaper article hailed him as one of the city’s leading eye specialists. He died of pneumonia at age 78, older than any of his brothers.

The sixth person to become a physician in the Tindall family tree was Percy’s daughter, Dorothy. She received her passion for vision care from her father, her bachelor’s degree at the University of Pennsylvania, a master’s from Columbia University, and her medical degree in 1938 from Woman’s Medical College of Pennsylvania (the first women’s medical college in the world).

Dorothy joined her father’s ophthalmology practice at 20th and Chestnut Streets, was chief of ophthalmology at the Woman’s Medical Hospital, and later became a professor at Penn’s Graduate School of Medicine. In 1962, Dr. Tindall opened her own practice at 1930 Rittenhouse Square, never married, and retired in 1981. She was once listed in Good Housekeeping magazine as one of 100 outstanding physicians in the United States.

Eighteen months after Van’s marriage to Annie they had their only child on December 30, 1887. She said she named her son Herbert Lincoln Tindall because as a child she once shook hands with Abraham Lincoln. He wasn’t in medicine and spent just two years at Central High School, but became a successful sales manager for Remington Typewriter Company, raised three boys, moved to the suburbs and had a live-in maid.

The call to healthcare came to his oldest son, Herbert Jr., but not until he earned his bachelor’s degree in chemical engineering from the University of Rochester (NY). He went to Hahnemann Medical College and served three years in the Navy during World War II as a medical officer. Herb practiced in Lancaster County, PA for 25 years and was an Associate Director of Lancaster General Hospital’s Family Practice Residency Program before retiring and living a total of 98 years.

The story line continues to one more generation, as Herbert Jr. had three children. While none of them became doctors, his son married someone who did. She was also a graduate of Hahnemann and practiced in Lancaster County as well.

Three children of Van and Lavinia didn’t pursue the field of medicine. Their only daughter, Maggie, got married and raised two children. Vanroom Jr. worked in the composing room of a newspaper and then for a printing company.  Daniel, who was named after his uncle, the doctor, was living with his parents when he died of a bowel obstruction on his 24th birthday in 1898.

That occurred just 11 months before Dr. Daniel Tindall died at age 81. He had been living with his daughter for a number of years, and the cause of death was “senile debility.” Van honored his dear uncle with this tribute that was published in the Hahnemann college newsletter: 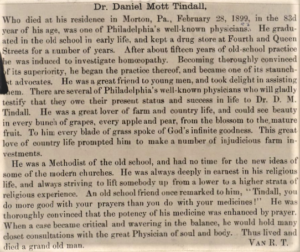 Dr. Van lived less than ten years after writing that. He succumbed to an inflamed gallbladder and blood poisoning on January 5, 1909, at age 69, the last surviving member of his college’s Class of ’64. Being loyal to both his alma mater and his church, he died at Hahnemann Hospital and had not one but three Methodist ministers to speak at his funeral, which was held at his home at 1613 S Broad Street.

He joined seven other family members in their plot. Annie would be the ninth and last person buried there, in 1940.

Below is a 1937 photo of that lot along with a recent shot. The most striking memorial is the black obelisk Van erected for his first wife, Lavinia. He chose a small, simple stone for himself, like all the others on either side of hers. 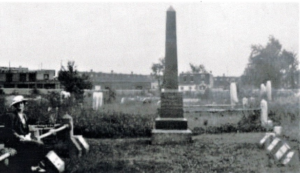 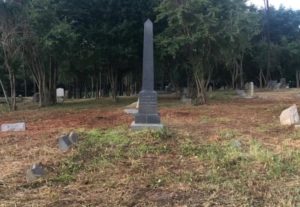 Besides Van, Lavinia and Annie, there are three of Van’s sons, Charles, Henry, and Daniel, and Charles’ three-day-old son, James. Van’s parents, Thompson and Margaret, are beside him as well. They died not long after Lavinia, not knowing their eldest son would be the inspiration behind so many others who felt the same calling he did, and would choose the noble profession of healing the sick.