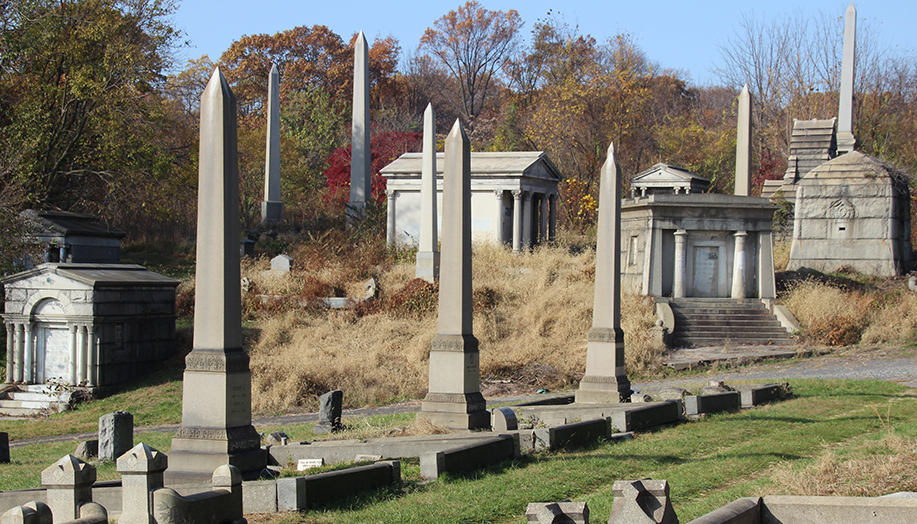 In fall 2017 a group of Haverford College students completed a project to research a number of the burials in Mausoleum Hill on the Yeadon side of the cemetery. These profiles will be presented in our Notable Burials section.

Edmund Anderson Thompson was buried in Mount Moriah in 1960 following his death on April 15, 1960 due to a myocardial infarction. He was born in Pennsylvania on April 4, 1887, and both his parents were Irish immigrants. According to his WWI draft card, Edmund was tall, had brown eyes and dark hair, and was of a medium build. Edmund did not serve in the military. Edmund graduated from the Philadelphia Central High School in 1904. He began teaching in Philadelphia public schools in 1906. In 1916, he began pursuing a graduate degree in sociology from the University of Pennsylvania. By 1920, Edmund was a public school supervisor, and by 1930, he was a public school principal. In 1940, Edmund was earning $5000 a year in that role, equivalent to about $88,000 in today’s money.

Robert Clayton Thompson was the eldest of Edmund and Anna’s sons. He was born on December 13, 1917 in Philadelphia. In 1940, at the age of 23, Robert had completed two years of college and was employed part-time at a finance company. According to his 1940 World War II draft registration, Robert had blue eyes and brown hair, was 6 feet tall, and weighed 230 lbs.

On November 27, 1946, Edmund married Harriet Bloodsworth Thorpe at St. John the Evangelist’s Church in Landsdowne, PA. His brother Robert was the best man and his other brother George was an usher. The couple had a son, Edmund Anderson Thompson 3d, and a daughter, Kathy Thompson Wiley. Edmund, Harriet, and their children all played golf at a competitive level.