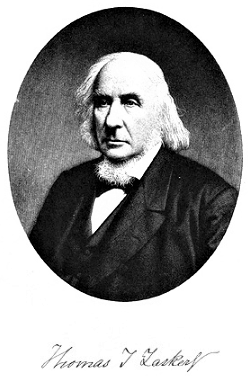 Thomas T. Tasker was born in Yorkshire, England of humble beginnings and grew throughout his life to be a very wealthy man, greatly respected by the cities of Philadelphia and New Castle, Delaware, and the country.  His father, William, was a land surveyor and teacher.  His mother, Mary, was a homemaker.  His father’s background afforded Thomas more than an ordinary English education. At the age of 13 he began a seven-year apprenticeship in the copper and ironsmith trades. He sailed for America in 1819, landing in Philadelphia on June 4.

For a brief period he was employed in stove manufacturing. In 1820 he established a coppersmith and iron company in West Chester PA. In 1824 he left that company and moved to Philadelphia and entered the establishment of Steven P. Morris, a manufacturer of stoves and grates. Thomas was considered a genius in mechanical engineering and was soon put in charge of the mechanical department. He moved up in the business to become a partner and owner.  The company grew rapidly, expanding into the manufacture of tubes for gas, water, steam locomotives, and boilers.

The company’s name changed several times between 1836 and the end of the 19th century as the Tasker and Morris families supplied sons and brothers to the ownership as the elders retired. The original S.P. Morris & Co. would become Morris, Tasker & Morris, then Pascal Iron Works, then Morris, Tasker & Co, & finally Delaware Iron Works.

In 1858 Thomas retired and the head of the company was eventually left to one of his sons, Stephen Tasker.  In 1872 there were two plants in Philadelphia; one at 3rd and Walnut Street, the other at 5th and Tasker.

The demand for their products grew and business greatly increased in size, employing over 2,000 men. It became necessary for better efficiency to connect the two plants which were approximately 1.5 miles apart. They petitioned the city of Philadelphia to allow a rail line to be laid to make the connection, but the city rejected the idea. 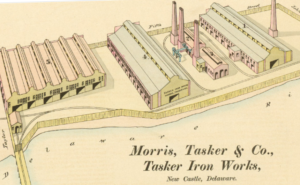 The company then looked elsewhere to build a new plant and settled on New Castle, Delaware. The factory was built on 35 acres directly on the Delaware River bounded by Fifth, Taylor and Johnson Streets.  The company continued to grow until 1899 when it was merged into a much larger company called National Tube. In 1901 US Steel bought National and 9 other companies and manufacturing was consolidated in McKeesport, PA.

This incorporation marked history’s first billion dollar company with authorized capital of $1.4 billion. In 1904 they began dismantling and removing all equipment in New Castle, creating a public park called the New Castle Battery Park.  The only structures that remain are about 100 row houses built for the workers and families in a complex called Dobbinsville.

Thomas married Elizabeth Hickman on February 24, 1829.  She was the daughter of Joseph Hickman of New Castle.  They had nine children, six of which survived. The Taskers lived for most of the late 1800s at 1502 South 5th Street in Philadelphia. Mrs. Tasker died in 1877 and is interred with Thomas at Mount Moriah.

Following his retirement in 1858, Thomas purchased 400 acres in various locations in Ridley Township, just southwest of Philadelphia.  As a hobby he raised breeds of cattle, beginning with Durham cattle, then Ayrshires and Guernseys.

When the Civil War started in 1861 Thomas was one of its most enthusiastic supporters. He was one of the founders and president of the Citizens Volunteer Hospital located at Broad and Washington in Philadelphia. Under his administration it was operated in a broad and humane basis, treating both Union and Confederate soldiers equally. It treated over 200,000 soldiers. The entire expense was covered by voluntary contributions, mostly from Philadelphians. When the war ended in 1865 and the hospital closed, the remaining funds ($4,000) were given to the Soldiers’ Orphan Asylum in D.C.

When Lincoln was assassinated in April,1865 the funeral train (called the Lincoln Special) route was organized to symbolically retrace Lincoln’s journey from Springfield, IL to Washington, DC with stops along the way. Following the viewing in the Capitol, the train’s third stop was in Philadelphia (there were eleven stops in all).  Thomas had the honor of being asked to be a pall bearer at the Philadelphia stop. The train arrived at Broad Street Station at 4:30 pm April 22, 1865.  The hearse carried the coffin to the Assembly Room in the east wing of Independence Hall.  The next day, lines began forming at 5am and over 300,000 mourners viewed the body.  Some waited five hours to view the body.  The train left Philadelphia’s Kensington Station for New York City the next day.

Thomas was a Methodist clergymen although it seems he was a guest preacher instead of pastoring his own church.  He was very instrumental in donating money and land for the establishment of new churches, donating the land on which Kedron Methodist was built in 1860. He also helped start a Methodist church in Prospect Park in Delaware County.  In 1863 he gave financial support to build the New Castle Methodist Episcopal Church at 510 Delaware Street. Its current name is New Castle United Methodist Church and the red brick church can be viewed on Google via satellite.

Thomas was issued a patent in 1842 for a water hydrant; and another in 1866 for a self-regulating hot water apparatus for private dwellings, schools, and coal gas works.  He founded the Gas Works in New Castle which manufactured gas and delivered it for cooking, heating and lighting through underground pipes manufactured by his company.  He also founded the Water Works in New Castle, and shortly after 1868 he built a flour mill which he sold in 1872 to William Lea & Sons.

He died in 1892 and is interred here at Mount Moriah with his wife and nine other members of the family. Tasker Street and Tasker-Morris subway station in Philadelphia were named for him. 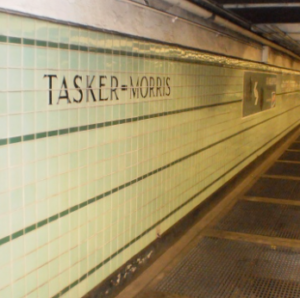 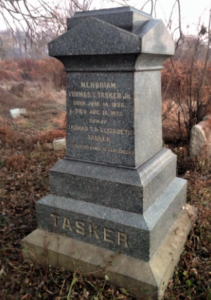 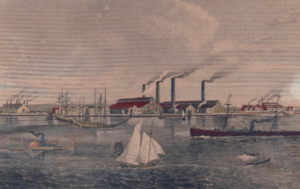