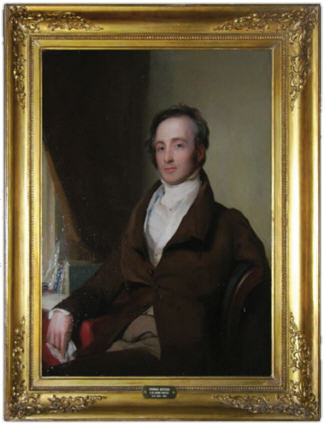 Thomas Kittera was born in Lancaster, PA. His father was John Wilkes Kittera and his mother was Ann Moore. He graduated from the University of Pennsylvania in 1805, studied law, was admitted to the bar in 1808, and practiced law in Philadelphia.

He was a prominent attorney, politician, and Freemason rising to high levels in each of those endeavors. In 1817 he became a Deputy Attorney for Pennsylvania; a prosecuting Attorney in the Philadelphia Mayor’s Court (1817-1818); and service in the Pennsylvania Supreme Court and the Court of Oyer & Terminer (Courts of Criminal Jurisdiction) (1821-1824). He was also elected to the Philadelphia Common Council (1821) and Select Council (1822-1826) and later served as its president for two years (1824-1826). In 1826 he was part of the John Quincy Adams faction of the National Republican Party (not related to the current GOP party) and ran in a special election for a seat in the U.S. House of Representatives in the 2nd District and won. He failed, however, to retain the seat in the next election.

As a Mason he was a member of Harmony Lodge 52 of Philadelphia, a Warrant Master of Phoenix Lodge 130 of Philadelphia, and rose to the highest level in the Pennsylvania serving as the Right Worshipful Grand Master of Pennsylvania from 1826-1828. At age 37 he was the 23rd youngest man to rise to this position. His portrait, painted by the famous artist Thomas Sully, hangs in the Masonic Temple at Broad & Filbert Streets in Philadelphia.

He died at age 50. He never married and had no children, and with his passing it is believed the Kittera surname is now extinct. He was interred in St. Paul’s Protestant Episcopal Cemetery in Philadelphia, but was interred later (1870) in Mt. Moriah (Section 41, Plot 44).