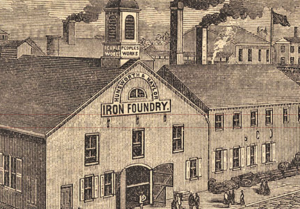 The Hunsworth family included three boys and three girls when the 1860 census was taken. Father John was a partner in the Hunsworth & Naylor Iron Foundry, also known as People’s Works at Front Street and Girard Avenue. All three sons also worked there in the manufacture of boilers and steam engines.

Thomas was just an apprentice in 1861, but he decided to become a soldier and take the $25 bounty, or bonus, that was offered to him when he was recruited the following year. Thomas stated he was 19 at the time, but he may have really been 18.

He fought with the 119th Pennsylvania Volunteers in the battle of Fredericksburg in December of 1862 and at Chancellorsville April 27- May 6, 1863. That last day, as they were breaking camp on the banks of the Rappahannock River, he died from an accidental gunshot wound. There is no record that anyone else was involved. A funeral service was held at the Hunsworth home May 13 and the body was eventually brought back to Philadelphia for burial at Mount Moriah May 27.

The obelisk that stands there today in Section 18, Lot 48 remembers not only Thomas, but a large family that lost six of its eight members over the next nine years, including both parents.