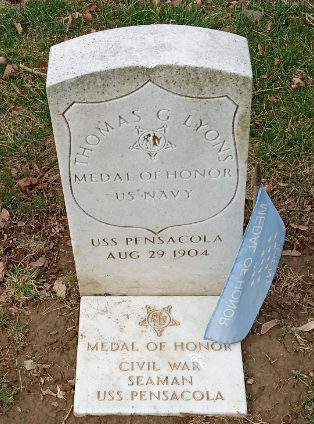 The Medal of Honor record for Thomas lists his birth year as 1838 in Salem, Massachusetts, but his military record consistently shows it as April of 1841 in County Cork, Ireland. The census for both 1850 and 1860 have him in a family with six other siblings in Salem, presumably leaving Ireland during the potato famine of the 1840s.

He joined the Navy in the first six months of the Civil War, and his first ship was the USS North Carolina. In early 1862 Thomas was on the USS Pensacola on its maiden voyage into the Gulf of Mexico. The ship joined Admiral David Farragut’s newly created West Gulf Blockade Squadron. She steamed with that fleet on April 24 in the historic dash past Fort St. Philip and Fort Jackson, Louisiana, both of which had been protecting New Orleans from either side of the Mississippi River.

Thomas was one of four sailors on the Pensacola given the Medal of Honor. His citation reads: “Carrying out his duties throughout the din and roar of the battle, Lyons never once erred in his brave performance. Lashed outside

of that vessel, on the port-sheet chain, with the lead in hand to lead the ship past the forts, Lyons never flinched, although under a heavy fire from the forts and rebel gunboats”. His Medal was issued on February 8, 1872.

By the time his last tour was finished in 1897 he had risen in rank to Quartermaster First Class.  Throughout his 36-year career, Thomas served his country on 27 different ships. Then the Navy served him by giving him a home in Philadelphia until his death on August 29, 1904. The hospital record describes the cause of death as apoplexy, or internal bleeding.