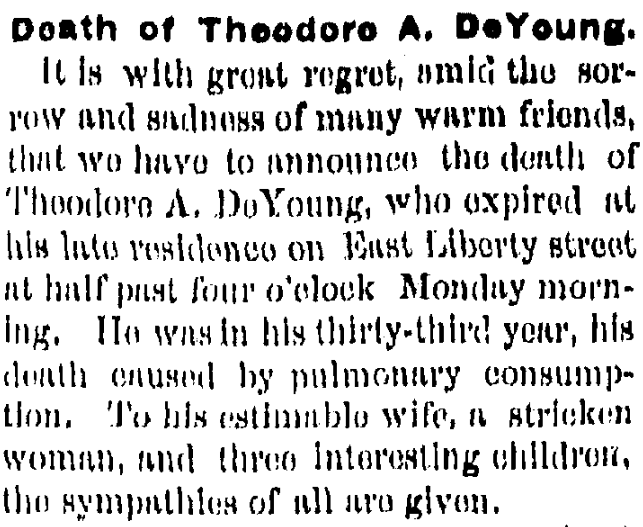 Named after his father, he was no doubt called Teddy by his four siblings as a child, and Ted as he grew older. He had an older brother, Benjamin, and two sister and another brother were added to the family as the nation headed into the Civil War.

Ted followed in Benjamin’s footsteps, who had enlisted in the 71st Pennsylvania Infantry in July, 1861. Not letting his age stop him, Ted was able to join Company A of the 72nd Pennsylvania Infantry the following month, most likely by exaggerating his age. Most of the recruits in the 72nd came from Philadelphia’s fire fighters. He may have been one himself, or had aspirations to become one. In fact, after the war, he did.

The brothers took part in several skirmishes over the next year, and both were at the bloody Battle of Antietam on September 17, 1862. Ted was shot in the arm, but Benjamin was killed, and his body was returned to his family for burial here in Section 6, Lot 6. The entire battle lasted just 12 hours but left 23,000 casualties. 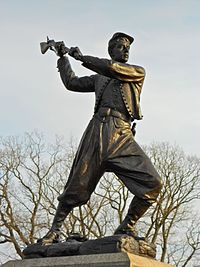 It’s estimated that one third of the men in the 71st were killed or wounded, and up to half of those in the 72nd, but Ted’s wound wasn’t serious enough to prevent his return to duty. He went on to fight at Gettysburg, where his unit played an important role in beating back Pickett’s Charge on July 3, 1863. Shown here is the 72nd Pennsylvania Infantry Monument at Gettysburg, erected in 1891.

His regiment fought in the Overland Campaign in the spring of 1864, and at the start of the Richmond-Petersburg Campaign, which began in mid-June.

On June 22, Private DeYoung was captured south of Petersburg. He was taken to the infamous Andersonville, Georgia prison, where nearly 13,000 soldiers died during the war, mostly from disease. It was overcrowded to four times its capacity, leading to a lack of food, water, and sanitation. 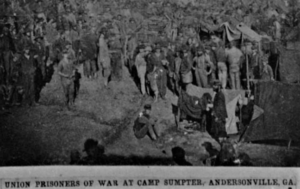 Meanwhile, the 72nd completed its three-year tour of duty and disbanded in August. Among the 1600 who served, Ted was one of 163 listed as missing or captured.

An exchange of prisoners on April 1, 1865 brought Ted his freedom after nearly ten months. He returned to Philadelphia and civilian life by mid-June. Louisa Mead became his bride on October 1, 1866 and the couple would eventually have four daughters.

What his vocation was those first few years is unknown, but volunteering as a firefighter was his  passion. In 1869 the family moved to Wooster, Ohio, and the 1870 census shows his occupation was saloon keeper. The local city directory listed “DeYoung & Lange Saloon, and dealers in wines, liquors, etc.” In that regard his father had some influence on his son; he was a distiller his entire career. In one census report his job was described as “rectifier,” someone who distilled ethanol to produce spirits for liqueurs or mixed drinks.

Ted rose in rank to become chief of the Wooster Fire Department, but stepped down in 1874 after the health effects of his imprisonment became worse, starting with coughing up blood and chest pain. The 1875 directory listed him as a restaurant owner.

Tuberculosis eventually ended his life on January 29, 1877 at 32 years old, leaving his wife with three little girls and a fourth on the way. His father arrived by train the next day for the funeral and brought his son back to Philadelphia for burial beside his brother in Section 6, Lot 6. Members of the fire department, the Masonic Lodge, and a large crowd followed the procession to the train station.

The plot would eventually include the graves of both parents and two sisters. Louisa filed to receive her husband’s pension in late 1877, and a few years later she returned with her children to Philadelphia.