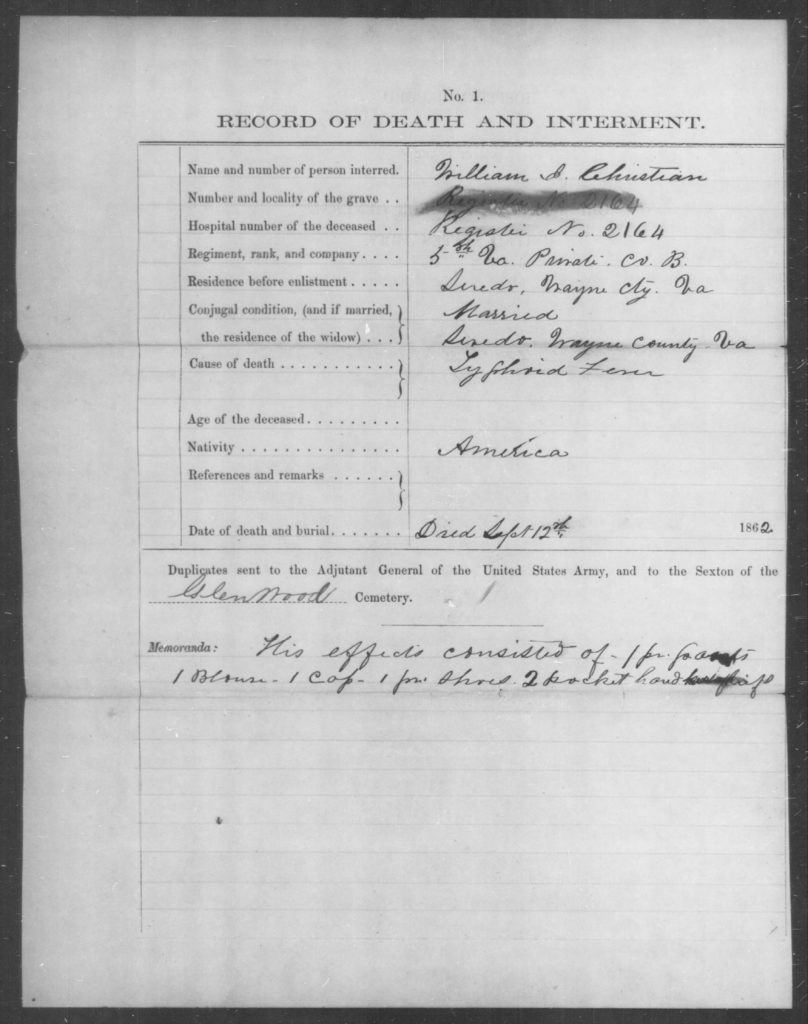 William Jasper Christian was born about 1830 at Ceredo, Wayne County, Virginia (now West Virginia). On March 25, 1854, he married Mary Ann Hatton (1837-1918). They had four children. According to his medical disability discharge, he enlisted August 14, 1861 in the 5th Virginia Volunteers, Union Army, for a term of three years. His occupation was listed as farmer.

Having been “carefully examined” by a Union Army surgeon on September 2, 1862 and “found incapable of performing the duties of a soldier” due to “chronic nephritis” or kidney disease, Private Christian was then discharged from military service on September 16, 1862 at Fort McHenry, MD.

However, other records, including a “Record of Death and Interment,” indicate that this Private William J. Christian had died of typhoid fever at the Broad Street U.S. Army Hospital, Philadelphia, PA on September 12, 1862. He was also reported wounded at the 2nd Battle of Bull Run, August 29, 1862. According to the Union Army’s records, Private Christian was buried at Glenwood Cemetery, Philadelphia, PA. 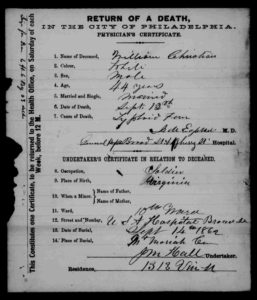 In 1891, the remains of 187 Confederate Prisoners of War who died at various U.S. Army Hospitals in the Philadelphia area and buried in private cemeteries in Bucks, Philadelphia, and Delaware Counties were removed. They were consolidated in an unmarked mass grave at Philadelphia National Cemetery, Haines Street and Limekiln Pike, in the Oak Lane section of Philadelphia. Among those removed from Mount Moriah Cemetery was a Union soldier, Private William Jasper Christian, now misidentified as a Confederate POW from Company B, “5th Virginia Infantry, CSA.”

The controversial mass grave remained unmarked, and the POWs unidentified, for nearly two decades while the United Daughters of the Confederacy and factions of the Grand Army of the Republic fought the Battle of the Monuments. The UDC wanted to place a monument commemorating 224 Unknown Confederate POWs who died in captivity, at Philadelphia National Cemetery. In 1901, a former GAR Commander in Chief and president of Philadelphia’s City Council, Louis Wagner, threatened to dynamite any monument commemorating “Rebels.”

On December 14, 1898, in his “Jubilee” speech at Atlanta, GA, President William McKinley (a Union veteran of the Civil War) advocated for the marking of 28,000 Confederate POW graves in the North. On March 9, 1906, Congress appropriated funds to establish a commission to identify and mark these graves. To settle the controversy in Philadelphia, in 1911 the government erected the first Federal monument ever dedicated to Confederate war dead, at Philadelphia National Cemetery’s mass grave. 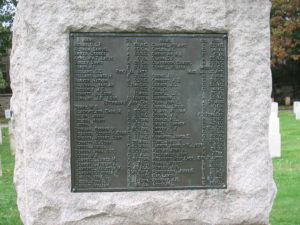 The Commissioner for Marking the Graves of Confederate Dead issued a report in 1912 identifying the POW graves remaining in the North. Among the Confederate POWs listed for Philadelphia National Cemetery on page 523 is Union soldier “W. J. Christian, Company B, 5th Va.,” date of death “Sept. 12, 1862.”

Today, Union Private William Jasper Christian’s name and unit can be found, misidentified as a Confederate POW, on the Confederate Soldiers and Sailors Monument at Philadelphia National Cemetery, third soldier from the top right column.