On May 30, 1901, most residents of Philadelphia were probably celebrating Decoration Day – a day set aside to acknowledge, commemorate and honor those who fought and died in the Civil War. Years later, after WWI, it would be renamed Memorial Day. William McKinley was President (although he would be assassinated just a few months later) and the United States had settled into post-war renewal. In Pennsylvania, iron, steel and oil were abundant and driving the economy.

On this day, a group of teens and young adults, all members of the Elm Social Club, planned a day’s outing at Rose Glen along the Schuylkill River in Philadelphia. The group traveled to the scenic area, enjoyed a picnic meal and then, after dividing into two groups, ventured out onto the river in rented rowboats. One boat, with 5 girls and 3 boys aboard quickly encountered an unexpectedly swift current which was caused by heavy rain during the prior week. While trying to navigate the current and return to shore, the boat continued to drift downstream. The boy rowing decided to go through the river locks to avoid the dam. Unfortunately, the locks were not in operation. In an attempt to reach shore, the oarsman turned the wrong way and the boat continued on its fateful course. Reaching the crest of the dam, the now frantic passengers stood up and the rowboat plunged into the rushing water and dropped 12 feet to the rocks below. Witnesses to the accident reported that none of the girls resurfaced, one boy attempted to swim to shore but perished before reaching safety and another boy, who had clung to the boat, was rescued almost a half mile down the river.

Among the dead were Bertram Osmond – age 18, Ray Riker – age 19  and Mary (Mazie) Kenney – age 15. All three were laid to rest in Mt. Moriah Cemetery. The other drowning victims were:  Florence Dinsmore, Florence Bohn, Maud Rutter, and Mary Sullivan. 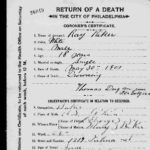 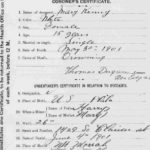 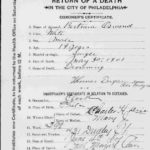