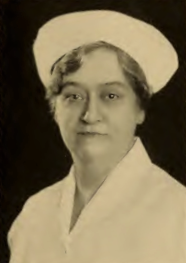 There have always been quite a few people named John Smith in Philadelphia. One of them, with his wife Margaret, had three boys by the time their only daughter was born, who was always called Annabel. Another brother followed four years later.

At that time John was a railroad clerk but was soon listed as a teamster on the railroad. What specific duties he held aren’t known but he did well, because Annabel never knew a time when they didn’t have a live-in servant. 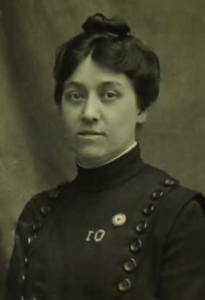 Nursing was her life, and she was working at the Pennsylvania Hospital when the United States declared war on Germany on April 16, 1917. A plan had already been drawn to mobilize a crew of healthcare workers from some of the city’s hospitals for overseas duty. Margaret Dunlop, Director of Nursing, assembled her Pennsylvania Hospital graduates and nurse volunteers from other local hospitals to be part of “Pennsylvania Base Hospital Number 10.” They departed New York on May 19 for a stopover in England before arriving in France.

The unit was officially part of the Armed Forces, and Annabel held the rank of Nurse in what was called the Army Nurse Corps. Her team included 24 doctors, two dental surgeons, 64 nurses, and 157 enlisted men, the first organized body of US military personnel to leave Philadelphia since war was declared. They replaced the staff of a British hospital in Le Treport, France. What they thought would be a 500-bed facility actually had 2000 beds, and they were overwhelmed until more help arrived.

Over the next 18 months until the war ended, the staff treated over 45,000 British patients and 3000 Americans. Remarkably, there were only 538 deaths. Annabel left the Corps on May 30, 1919, but her record was stamped with this statement: “Reserve nurse relieved from active duty; not discharged.” It was, however, the end of her military service, and an experience that changed her life.

She remained single and embarked on a teaching career at Hahnemann Hospital’s School of Nursing. The 1930 census listed her residence as a “lodger” at the hospital’s address, 245 N 15th St. That was the same address on her 1934 application for veterans’ compensation. Following a ten-year run as Director of Nursing, the 1937 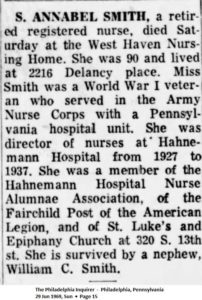 school yearbook was dedicated in her honor, “to a noble woman, by whose efforts we were guided along the path of sympathy, service, and love of our profession.”

Annabel may have left the classroom but she 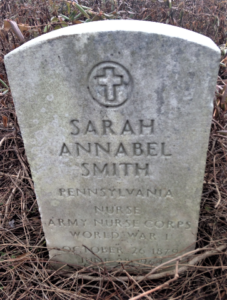 remained active into her 70s. Both the 1940 and 1950 census reports show her working full-time as a Registered Nurse in private practice, living on Delancey Street. That was her home for 30 years until her death. Her nephew made sure she received a military headstone after her burial at Mount Moriah.