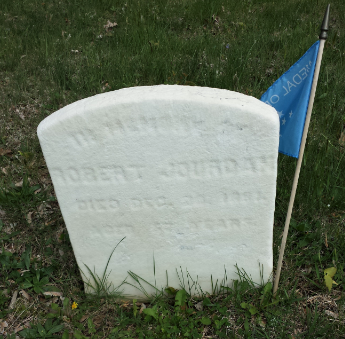 Details on Robert’s life outside the Navy only include his birth in New York City and his probable birth year of 1825. He first enlisted in 1855 and remained a seaman for the next 25 years.

Although his military records and death certificate show his last name as Jourdan, when he received the Medal of Honor it was misspelled Jordan. The award was for “extraordinary heroism in action while attached to the U.S.S. Minnesota and temporarily serving on the U.S.S. Mount Washington, during action against the enemy in the Nansemond River, Virginia, 14 April 1863. When the Mount Washington drifted against the bank following several successive hits which struck her boilers and stopped her engines, Coxswain Jordan [sic] boarded the stricken vessel and, for six hours as fierce artillery and musketry continued to rake her decks, calmly assisted in manning a 12-pound howitzer which had been mounted on the open hurricane deck.” (Awarded July 10, 1863)

Robert was a quarter gunner on the USS Colorado in 1867 and on the USS Wabash in the early 1870s until it was decommissioned. His last enlistment occurred September 23, 1880, returning to the Colorado, which was also decommissioned and moored at the New York Navy Yard. It was designated the USRS Colorado, a receiving ship used in harbor to temporarily house newly recruited sailors.

Two months later he was in the New York Naval Hospital with bronchitis, noting that “he was exposed to climatic changes and caught a severe cold.” In January 1881 Robert was discharged and transferred to the Naval Home in Philadelphia. He died there later that year from chronic pneumonia.