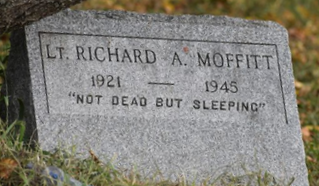 Richard was raised with an older brother and sister, Fred and Florence, by their parents, Charles and Sarah. The Moffitt house was on Larchwood Street, just around the corner from the University of Pennsylvania Hospital in West Philadelphia. There’s no record that Fred and Florence finished high school, but Richard did. West Philadelphia High was within walking distance, and he went to work right away in 1939 as a mechanic in a machine shop.

The threat of war was on everyone’s mind, but maybe not Richard’s, since registration for the draft was initially required only for men 21-35 years of age. But he did complete his draft card as required in 1942, and it indicated he was not a burly man, at 5’4” and 133 pounds.

He was, however, an ideal size for duty in an aircraft, and became a 2nd Lieutenant after being inducted in August, 1943 in the Army Air Corps. Richard remained stateside, training crews to fly the famous B-17 bomber. It was nicknamed the “Flying Fortress” by a newspaper reporter when he first saw it. The manufacturer, Boeing, liked it so much the name was trademarked. It was an appropriate name because, unlike previous airplanes, it had so many gun installations it could shoot in any direction to protect itself.

Richard was with the 223rd Base Unit Combat Crew Training Squadron stationed at Dyersburg Army Airfield in Tennessee. During a training flight in early 1945 his bomber collided in mid-air with another B-17. All ten aboard the other bomber were killed. Richard’s pilot and three others parachuted to the ground and survived, but he and five others on his crew died in the crash.

His body was returned to Philadelphia for burial here, and five years later his parents received a $500 death benefit. The rest of his family moved years later to Missouri and were all buried there.