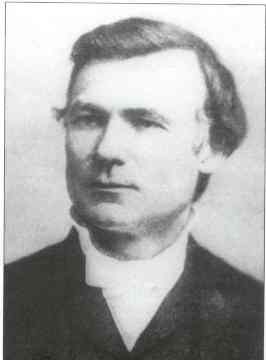 William H. Burrell was born about 1822, one of 12 children who were grandchildren of a captain in the American Revolution. Census records indicate that he was born in northern New Jersey and resided in various locations in Pennsylvania before finally settling in Camden, NJ.

William answered the call to the ministry at an early age, although the extent of his schooling is unknown. In 1852, the Siloam Methodist Church in Bethel Township, Delaware County, Pennsylvania was organized  with Rev. Burrell as its first pastor. The next year he married Elizabeth Backus and they had five children.

On September 10, 1879 Rev. Burrell partnered with Ezra Lake, James Lake and S. Wesley Lake, all Methodist ministers, to buy Peck’s Beach, a barrier island on the New Jersey shore. The area was named after John Peck, a whaler, and until the mid-19th century it was used as a fishing camp, for cattle grazing, and occasionally as a picnic area for residents from the mainland. The ministers formed the “Ocean City Association” to establish a Christian retreat and resort. Land was cleared, streets mapped out and lots were sold for cottages and hotels, and the town of Ocean City was incorporated on October 20. Rev. Burrell was the first postmaster.

In 1881, the Ocean City Tabernacle was built. The wooden structure stood until being destroyed by a hurricane in 1944. It was rebuilt in 1957 and, with further renovations and additions, the house of worship continues to provide interdenominational religious services for summer visitors to the shore town to this day.

After some years the Burrell family settled into a home on Cooper Street in Camden, New Jersey conveniently located near the ferries. It was here that William earned the title of the “marrying parson.” Prior to the passing of the state’s “Lloyd Marriage Bill” in 1897, couples from other states could come to New Jersey to get married without having to get a license. Rev. Burrell built a lucrative business marrying these couples in his home

with Elizabeth serving as the witness.

It is reported that he married thousands, often having several couples waiting in his parlor to tie the knot. In June 1891 the Philadelphia Inquirer ran a short article titled “Two Odd Marriages”. One of the marriages, performed by Rev. 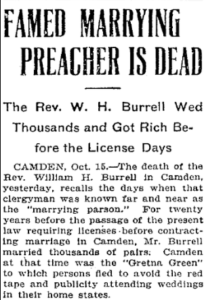 Burrell united a groom whose age was given as 72 and his bride age 18. The passing of the Lloyd Bill cut into the Reverend’s wedding business, but by that time he had made a substantial living and was able to retire. He was careful to assert that he never knowingly performed the ceremony for underage parties.

Rev. Burrell died in Camden on October 14, 1909 and is buried in Section 131, where an abundance of Methodist ministers are located.