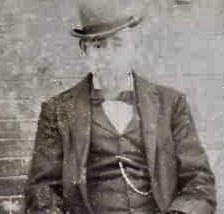 Thomas and Mary Waer had six children, but Reuben and two other sons used the name Ware as adults, although they weren’t always consistent. Whether intentional or just misspelled, other variations included Wair, Weir, and Weer.

Reuben’s lifelong passion was working with wood and he became a cooper, one who makes or repairs wooden barrels. He married Matilda Montieth when he was 23 and their first child, Annie Jane, soon followed. A son was born in 1859, but Matilda suffered from postpartum depression; she died from what was then called “hysteria.” Their son died of “marasmus” (severe malnutrition) just two weeks later. To help him raise his little girl, Reuben quickly found Annie Jane Love, who added five more daughters to the marriage, and two sons who died in infancy.

His wife’s sister, Isabella Love, married William Leonard on the last day of 1860, and the two families were very close. On March 15, 1865 both Reuben and brother-in-law Bill enlisted as privates in Company A of the 214th Regiment, Pennsylvania Infantry. As General Lee was surrendering at Appomattox on April 9, Reuben and Bill and the 214th were on their way to Winchester Virginia where they were assigned provost duty, meaning they served as military police. After more than a month there, they moved to Washington D.C. and continued as guards until their term expired, having never seen any action. They had both been promoted to corporal and both left on March 21, 1866.

The Wares lived at 1215 Peters Street in the 1860s and 70s as he built a prosperous barrel business. Bill’s family lived just down the street at 1228 Peters Street and they all went to Calvary Presbyterian Church and had their children baptized there. They may have even decided to commemorate their military service in northern Virginia through their offspring; Bill had a daughter born February 15, 1867 named Emma Virginia Leonard, and Reuben had a daughter on July 21, 1867 named Laura Virginia Ware. Sadly, Emma Leonard died in 1867, so Reuben bought a plot in Section 51 that the two families would share, not knowing he would need to bury Laura Ware there less than four years later.

The 1876 city directory lists “Ware & Degrasse, Coopers” at 38 N Water Street, which Reuben and his partner, Peter Degrasse owned for about 30 years. When Reuben and family moved, and the old “Ware house” was sold to the Leonards. After Reuben’s wife died in 1895, he lived with his daughter  and eventually sold his share of the business when he was in his mid-70s. He was buried in the family plot, which included his wife and three daughters and several from his sister-in-law’s family, the Leonards.