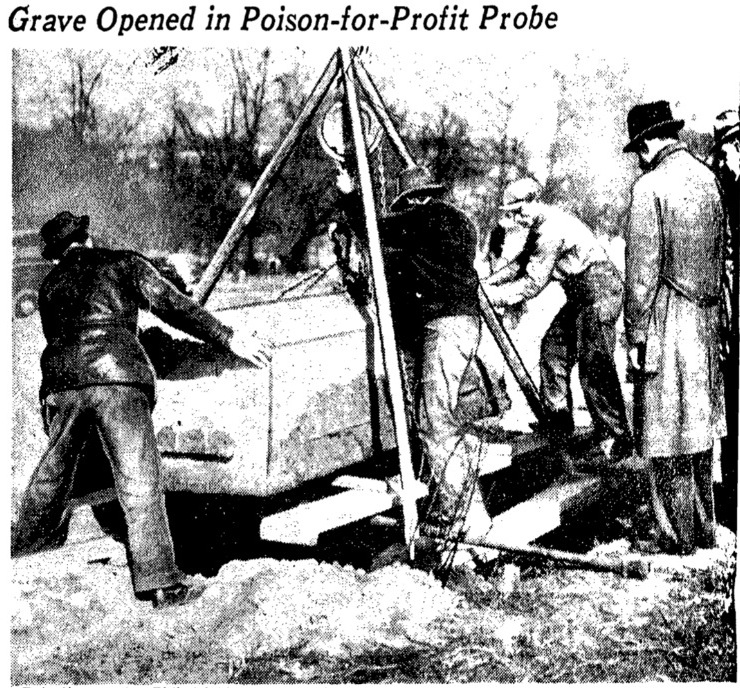 A murder-for-hire scheme played out in neighborhoods across Philadelphia in the late 1930s that intrigued city residents for almost two and a half years. The bizarre story began in October 1938 with the death of an Italian immigrant named Ferdinand Alfonsi. Under normal circumstances, the death of a poor laborer in a large city would go unnoticed outside of the deceased’s circle of family and friends. But Alfonsi’s death was not normal. His autopsy revealed that his body was saturated with arsenic.

Since three Philadelphia detectives were already investigating similar deaths, this newest report was reviewed with great interest and led them to believe that there was an arsenic murder ring operating in the City of Brotherly Love. Philadelphia police and the District Attorney’s Office would be taken on a criminal journey that would include not only poison-for-profit, but insurance fraud, extortion, seduction and superstition. The characters in this murderous tale are too numerous to list. And while each story contained it’s own series of plot twists and turns, the outcome remained the same, someone ended up dead.

The leaders of this murderous bunch targeted residents of poor Italian neighborhoods, seeking the vulnerable and exploiting their desperate situations for profit. Although not substantiated and possibly embellished by the press, several stories were told of wives, unhappy in their marriages, visiting a spiritualist looking for a magical solution to their troubles. The spouses were given love potions to fix their marital woes. When the potions didn’t work, another offer was made; the use of a magic water containing arsenic which held stronger power, but was potentially fatal. Many of the wives knew the substance could be lethal, but opted to continue with the plan. Others, who were opposed to possibly killing their husband, were seduced by ring members who then used this information to extort the wives. In yet other cases, they resorted to preying on the fear and superstitions of the wives by evoking the “evil eye,” basically frightening the women into participation.

No matter what the story, the underlying motive for the murders was the profit received from insurance payments. The potential murder victim either already had an insurance policy or one would be written for him prior to the murder, often without his knowledge. Once the victim died, the ring would collect a portion of the insurance payout for their assistance. Arsenic poisoning was the method of choice because it normally would not be suspected and the resulting death could be attributed to anything from gastroenteritis to pneumonia. If a quicker payout was needed, other murder options were also available. “Accidental” deaths often resulted in larger policy pay-outs. While the majority of the murders involved wives, dubbed “black widows,” the ring offered it’s services to any family member as long as there was a profit to be made.

Assigned to the investigation was Assistant District Attorney Vincent McDevitt. He was determined to preserve all evidence in the poison cases for presentation at trial. He implemented procedures for obtaining and securing evidence that are similar to those used today. Soil samples from grave sites, embalming fluids from corpses and victim’s clothing were subjected to chemical analyses. Doctors examining the corpses were ordered to wear rubber gloves and containers and surfaces were sterilized to avoid potential contamination. The immense number of exhumations almost overwhelmed the coroner’s office, prompting the FBI to offer use of their laboratory facilities for the growing number of bodies. The bureau wasn’t otherwise involved since the crimes did not fall under federal jurisdiction.

When the trials concluded, there were at least 35 deaths attributed to the arsenic ring although officials believed there may have been more than a hundred. The sheer number of participants combined with the peculiar circumstances and the suspicion that the ring had expanded into New York, New Jersey and Delaware made an actual number impossible to determine. The investigation was exhaustive and pushed the Philadelphia judicial system to its limits, but in the end the arsenic ring was disbanded. Two members of the cold-blooded killing ring met their demise in the electric chair and another 14 men and women were convicted and served lengthy prison sentences. With members who were insurance agents, doctors, undertakers, those able to obtain the poison and those willing to carry out the murders, the Philadelphia arsenic ring provided all the players needed to successfully operate their poison-for-profit business.

At least one victim was buried at Mount Moriah, an Italian immigrant named Pietro Stea. He was a grocer living on 9th Street in Passyunk Square, and married for 24 years when his wife Nellie died on February 8, 1932. With five children between the ages of 8-21, Pietro married Mary Pasquarella later that year but nothing else is known of her life. She is named in a 1939 newspaper account for assisting homicide detectives, but whether she was married to Pietro when he died remains a question. Somehow another woman named Rose entered the picture but the circumstances and exact relationship is unclear. She is named as a “common law” wife, not only with Pietro but with others, earning her this title:

Rose Ruggiero had two boys with her first husband and two girls with her second, whose last name, Carina, she kept after he died in 1931. She then became the common-law

wife of Prosper Antonio Lisi who died in 1933. While she wasn’t legally married to Pietro Stea either, newspaper accounts reported she had a life insurance policy taken out on him without his knowledge. This chart depicts just one part of the extensive conspiracy as pieced together by the police.

His death certificate in 1936 lists the cause as diabetes but because she was linked to other suspicious deaths, his body was exhumed

from his plot at Mount Moriah in 1939. She was indicted and tried that same year but was acquitted of his murder.

What about the grocer’s five children? The three daughters took the stand during Mrs. Carina’s trial to describe his agonizing death, which was later determined to be from poison hemlock. The eldest daughter had married before her father’s death, and had her two sisters living with her, her husband, and daughter, according to the 1940 census.

The oldest son, Anthony, was 13 when Pietro died. He may have lived with his sisters for a short time but may have lived as a boarder and worked as a messenger boy. He was living with one of his sisters in 1942 when he registered for the draft, spent three years in the Army, married in 1947, divorced shortly after a son was born, and lived his last days in California. The youngest son was Salvatore, who was only 10 in 1936. As a ward of the state, he was placed in St. Joseph’s Home for Homeless Industrious Boys at 16th and Allegheny Avenue. From there he spent two years in the Navy, earned his accounting degree from LaSalle College in 1949, enjoyed a prosperous work and family life, and died when he was 90 in Ambler, Montgomery County.

As for Rose herself, she next married another widower, Isadore Tropea, in 1938. A newspaper reported in 1939 that he was a semi-invalid suffering from a stomach ailment and living with relatives. He got a divorce, remarried, and lived another 25 years, while Rose had to live with her reputation as a “professional widow” until her death in 1954.