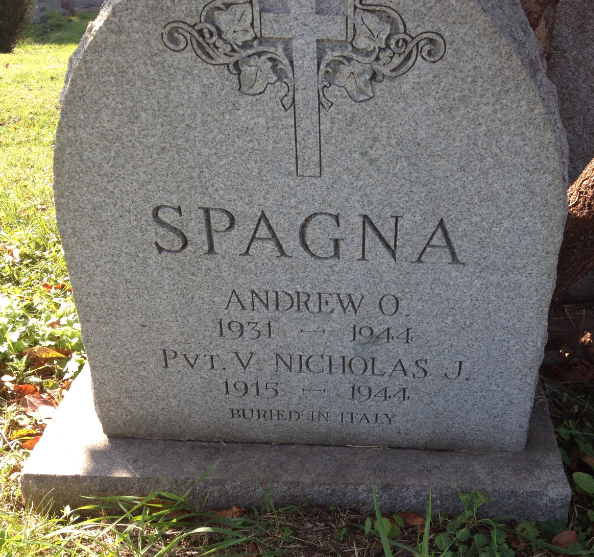 Three younger brothers and two younger sisters looked up to Nicholas as they grew up in the Point Breeze section of South Philadelphia. He was born on November 5, 1915, and was named after his Italian-speaking grandfather, Vito Nicholas Spagna, who lived with them. In 1941 Nicholas was living on his own but working close by as a pipefitter at the Philadelphia Naval Shipyard.

Six months after Japan bombed Pearl harbor, on June 27, 1942, Nicholas became a married man. Just after his next birthday he was called to serve in the Army, leaving Emily, his pregnant wife, behind. Soon he was duty-bound for Italy, but also honor-bound, emboldened to be fighting for his ancestors’ homeland as part of the 85th Infantry Division.

On May 16, 1944, his platoon was under enemy fire in the Battle of Anzio, and was forced to abandon its position. Nicholas volunteered to stay behind to defend the weapons and equipment. The platoon eventually regained its position, but not before Private Spagna had given his life.

For his bravery he was awarded the Silver Star Medal for gallantry in action. His daughter, Betty Anne, was just eleven months old when her father was buried in Italy.

Meanwhile, less than a week before Nicholas was killed, his family was shocked to find his 13-year-old brother Andrew had committed suicide by hanging himself from the bathroom door of his family’s home. Neither brother knew of the other’s death.

Four and a half years later, Nicholas received a military funeral 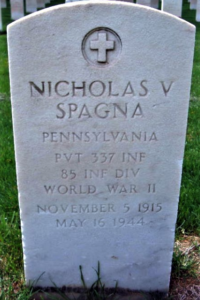 and was transported from Italy to Beverly National Cemetery near the Delaware River in Burlington County, New Jersey where he was given a military headstone, shown here. His family wanted to honor both sons who died within days of each other, so Andrew’s gravestone is also a cenotaph for Nicholas, a grave marker in honor of a person whose remains are actually buried elsewhere. Unfortunately it shows his grandfather’s name along with the initial J, for his father, Ferdinand Joseph, and implies he is still buried in Italy.