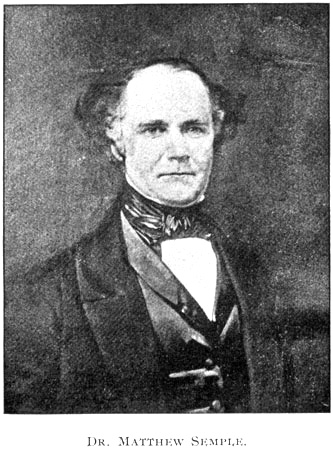 Matthew was born to Matthew and Hannah Jackson Semple in May of 1813. The senior Matthew came to America in 1798 and for years operated a shipping business in Philadelphia. At a young age, his son became interested in chemistry, even setting up a makeshift laboratory in the attic of his father’s home. So strong was his interest, he used items such as discarded bottles to construct rudimentary tools to conduct his experiments. Matthew spent so much time pursuing chemistry that his basic education was delayed. However, once he began attending the Mc Adams school, he became a dedicated student. He studied to become an Episcopal minister under the guidance of renown pastor and rector of Old St. Paul’s Church, Stephen Tyng. Over several years, Matthew became a well respected preacher and could have had a successful career as a pastor but he remained drawn to the field of chemistry.

About 1930 he entered medical school and graduated from the University of Pennsylvania in April of 1838. His entry into the medical field was not immediate as he continued to follow his religious ministrations. But, with the opening of the Homeopathic Medical College of Pennsylvania (later Hahnemann Medical College and Hospital of Philadelphia named for Samuel Hahnemann, the German physician who is credited with developing the system of homeopathic medicine), he joined the faculty as professor of chemistry and toxicology. One of the founders of the hospital and a pioneer in the field of homeopathic medicine, Jacob Jeanes, would become Matthew’s mentor and life-long friend. Semple’s dedication to the institution and his enthusiasm for the field led him to not only serve on the faculty but also financially contribute toward maintaining the school. When the Homeopathic College of New York opened, he served in a similar capacity at that institution for several years. Professor Semple was beloved by his pupils and held in high esteem by his peers. Sincere, humble, reliable, kind. loyal, unassuming and honest are just a few of the traits attributed to him by his friends, fellow faculty and students. In 1895 an oil painting of Dr. Semple was presented to the college by his family and hung in Alumni Hall.

Matthew married Caroline Wills of Harrisburg, PA in 1842. Together they would have five children; three daughters and two sons. Professor Semple died at his home on Broad Street in Philadelphia on May 17, 1867. He was laid to rest in Mount Moriah Cemetery on May 21 which would have been his 54th birthday.

In the Mount Moriah Charter of March 26, 1855 Dr. Matthew Semple was mentioned as owning one of the family lots “which ornament the various sections of the Cemetery in which they are located, are substantial evidences of correct taste, and a large and free expenditure of means.”